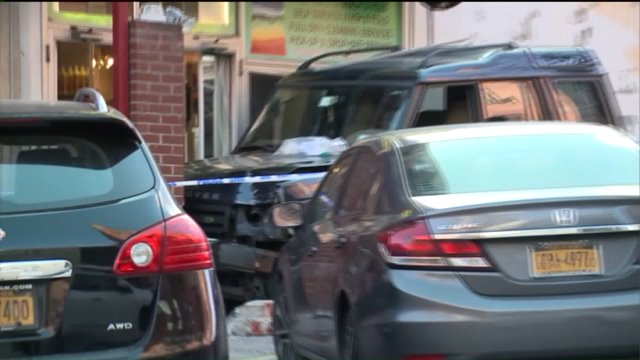 EAST HARLEM, Manhattan — Two people were injured after a driver lost control of his SUV, running over an off-duty police officer's foot and pinning a woman against a building wall Thursday.

The woman was walking out of the laundromat Thursday afternoon between Lexington Avenue and East 102nd Street when a black SUV came rushing towards her. Witnesses said they saw clothes all over the sidewalk, then later realized the car had struck a woman. The car pinned her against the building wall.

Moments before the woman was hit, the driver ran over an off-duty cop's foot.

EMS were at the scene around 2 p.m. and removed the woman. She was taken to the hospital in critical condition.

The off-duty officer was also taken to the hospital and treated for his ankle, police confirmed.

The driver was taken into custody. Police are still investigating what caused the crash.