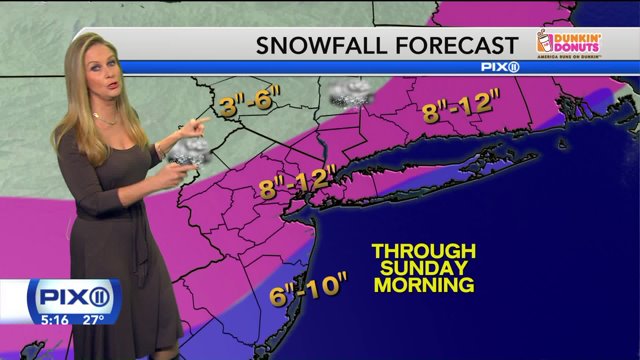 NEW YORK — A potentially historic and crippling snowstorm is days away but preparations are already well underway in the five boroughs where it's forecast up to a foot of snow could fall.

The Department of Sanitation said New York City will have more than 1,700 plows on the streets when more than 2 inches of snow has accumulated.

The plans also call for the city to send out salt spreaders on Friday evening to lay down a "brine" to help keep accumulations down, officials said. More than 303,000 tons of rock salt are ready to melt whatever snow comes our way.

Sanitation workers have been assigned to two 12-hour shifts starting Friday at 7 a.m., with 2,400 workers per shift.

Some 50 million people are in the path of the storm, according to NOAA.

Snowfall is expected to begin Saturday morning and become heavy at times through the afternoon. Rain and sleet may mix with snow over the coastal areas Saturday afternoon.

Mayor Bill de Blasio on Thursday said it's "crucial" New Yorkers stay off the streets and use mass transit as much as possible when the storm hits.

"We are prepared," he said. "The agencies are ready for what's coming up ahead."

It was about this time last year when a looming storm prompted the governor to take the unprecedented move to shut down the city's subway system.

de Blasio said that storm was forecast to be more severe than this weekend's nor'easter and added that he does not anticipate having to close public transit.

As of Thursday morning, schools in the city are planning to open for classes at their regular time on Monday, de Blasio said.

Eventually the storm will taper off late Saturday night into Sunday morning and the sun will begin to peak out by the afternoon.

A blizzard watch has been issued for Saturday morning through Saturday evening for New York City, Long Island, and Essex, Hudson and Union counties in New Jersey, according to the National Weather Service.

A winter storm watch is in effect from Friday evening through Sunday morning for the remainder of New Jersey as well as the Hudson Valley.

The conditions -- dangerously cold temperatures, gale-force winds and whiteout conditions at times -- could be life-threatening.

de Blasio said anyone having trouble with heat or hot water should first call their building manager. But if the problem is not fixed, they should call 311.