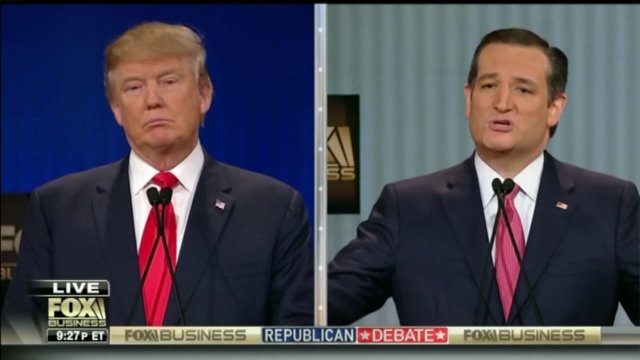 The debate underscored that the competition between Trump and Cruz will be rough-and-tumble in the days leading up to the Feb. 1 Iowa caucuses. The candidates tangled over Cruz's eligibility to serve as commander-in-chief and the real estate mogul's "New York values," with Trump besting his rival with an emotional recounting of his hometown's response to the Sept. 11 attacks.

"But everyone understands that the values of New York City are socially liberal, pro-gay marriage, focused around the money and the media," Cruz said. "Not a lot of conservatives come out of Manhattan."

But Trump came back with a response that could not be argued.

"We saw more death, and the smell of death and it was with us for months," Trump said. "And we rebuilt Manhattan and everyone in the world watched and everyone loved New York and New Yorkers and that was a very insulting statement."

Trump also renewed his suggestion that Cruz may not be eligible to serve as commander-in-chief because he was born in Canada to an American mother. And if you caught it – Trump actually admitted Cruz is catching up to him in the polls and it was expected the two would go at it as the Iowa caucuses are just three weeks away.