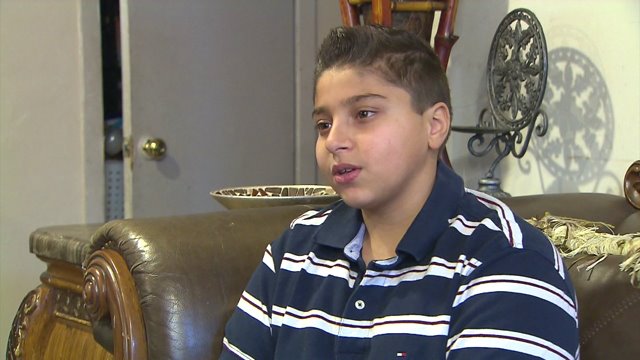 An East Islip mother is angry and upset and she is making some serious allegations against the principal and assistant principal of East Islip Middle School, where her son attends school.  Nubaisha Amar claimed Mark Bernard and Jason Stanton tried to get her son to write out a false confession saying he was a terrorist and an ISIS supporter.   The claim, Amar says is false and now she wants the two administrators fired.

Nashawn Uppal, Amar's son, is 12 years old and in the seventh grade.  He admits he said something he shouldn't have, but says it came out of his mouth to get a harassing bully to stop saying what he was saying.  Over and over he was called a terrorist and asked what he would blow up next.  In response, an exasperated Amar said he responded with, "Yes, I am a terrorist and I will blow up the school fence."

The incident the Uppals say happened last Wednesday.  The day after is when Nashawn said he was called out of his final class of the day minutes before the school day ended, brought in to a room with the school's Principal Mark Bernard and Assistant Principal Jason Stanton.

Nashawn says he was told by both Bernard and Stanton to write what he said, that he was a member of ISIS, a terrorist and would blow up the school.

Nashawn said he would not because that was not exactly as he said it.

"He tells me to write the wrong thing when I didn't say it," said Uppal.

During this time, Nashawn's mother said she was waiting for her son at dismissal and never received a call from the school about her son's whereabouts until about two hours later.  Local police were called, her son questioned by officers and the family even consented to having their home searched.

East Islip police confirm to PIX11 they found nothing and no case of wrongdoing by Uppal – that this was a case of "boys being boys," and yet, Uppal was suspended by the district for five days.

Amar believes administrators not only harassed her son, but also fabricated their version of events.

Superintendent John Dolan denied these allegations and in a statement to PIX 11 says a fair and appropriate disciplinary process is underway and the district has no further comment at this time.  When asked if the bully Nashawn referred to in his version of events was ever disciplined, the district would not comment.

"He suspend my son for what. He's supposed to go ask the kids and investigate and he didn't do his part," said Amar.

Nashawn''s mother did tell us she was supposed to have a meeting with school district officials on Monday, but she was ill and had to cancel. She is not waiting for that meeting to be rescheduled.  She also told PIX11 she's not comfortable with the idea of her son going back to East Islip Middle School.