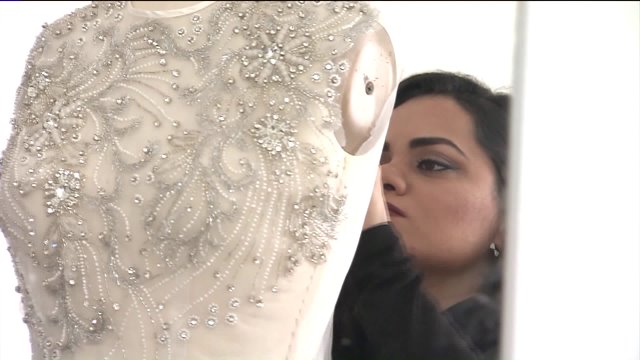 “When I was first looking into becoming a designer my dream was being able to give back.”

“I decided why not start a business where you get your dream gown and start your marriage by helping another woman out ."

So “wedding gowns  with a purpose”  was born, with a percentage of the cost donated to charity.  Her charity is restorenyc.org

“It’s unbelievable to me that its 2016 and we have sex slaves and no one is talking about it, not enough people are talking about it.  I found an organization in New York that’s local that rescues them.”

These brides-to-be, now, turning the fabric of their lives into a pattern of helping  others.

“I think everybody wants to be part of doing something good .  I see it as a karma , starting your marriage helping somebody else. “

“I remember being in Iran and seeing the kids on the streets and  I remember giving them my cookies.”

She grew up into a life of privilege in Iran, but, everything changed  after the new regime came into power.  When Natalie was just five, her family left everything behind and emigrated to Sweden where they lived in a refugee camp for four years.

“Sweden is a beautiful country but there is a lot of racism actually.  I had a neo-Nazi come and put guns to my head and you can move back to your own country, it was a really big shock in the beginning”

Life took another turn as teenager, taking Natalie to California, where she worked at the dream center.

“First I moved to la to work with homeless youth I was , I lived at the shelter 5 years while working with the kids.   I went to this place thinking I was going to change so many others in reality I’m  the one that changed. “

Its’ there she found her purpose. And when she decided to make New York home.

"I  realized in order to help people you have to do what you love and be the best at it.  And that in turn will give you a platform to influence life.  I decided I wanted to get into design. Finally after 8 years of applications I got my green cart and i knew this was home. “

A home where Natalie’s heart lives  along with her passion to pay it forward.

“My whole thinking is if I die today what have I done.  What is the legacy I’m leaving behind”