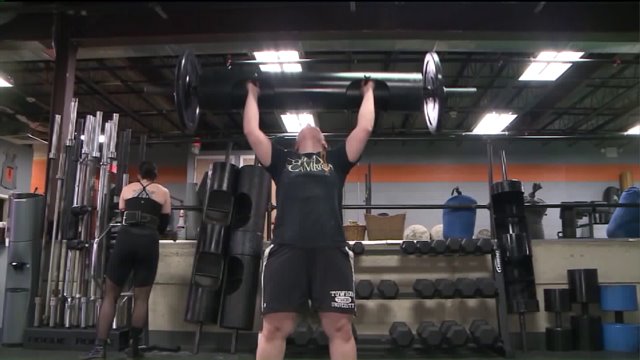 MAMARONECK, N.Y. — Next week some very strong men and women will compete for the title of New York's strongest in Mamaroneck, New York. But regardless of who takes home the trophies, some four-legged friends might be the biggest winners of the competition.

Strongman competitions can be uplifting.

"To manipulate and maneuver something of this size is incredibly difficult, incredibly challenging and incredibly rewarding when you can do it," Todd Giorgi said.

Which is why the owner of New York Strong decided to host a competition to crown the strongest athletes in the Empire state.

"It's not just how strong you are and how much you can lift, you have to do it for 60 seconds straight," Giorgi said.

Next week, 90 athletes will lift massive atlas stones, press giant logs, and carry hundreds of pounds of sandbags until they simply can't hold on any longer.

But to call this competition strong-MAN is really a misnomer. Women compete in the competition too — and they lift some pretty heavy weight.

"I think because it's such a niche sport, we don't make money really doing this. We do it because we love it," trainer Caitlin Yuhas said.

Yuhas has been competing in "Strongman" competitions for two years.

"Is there an intimidation factor when it comes to some guys?" PIX11 News asked the trainer.

"I don't hang out with those guys," Yuhas said.

This year Yuhas is training one of PIX 11 News' very own for the competition.

"It just makes you feel good," Zauderer said. "I feel confident, I feel better about myself."

And she's proud to call her self one of the strong women competing in her first competition.

"I mean strongman is such a great community that you have women who are putting up serious weight," she said. "Everyone's there just to have a good time and I'm picking up weight with the big boys too."

Whether or not the two ladies are among the men and women who take home trophies it might be their four-legged friends that get the biggest benefit.

"One month before my first competition I rescued my first senior dog. And he was a legacy dog," Giorgi said. "He was in the shelter for over 8 years and he needed a home before he died. So, I needed to take him home, I took him home and he lived 21 months. His first competition was my first competition, I brought him. And he laid there it the grass and kids were petting him. You know you just see this pitbull that people are scared of and he was just the sweetest dog in the world."

So Giorgi is donating proceeds from the competition to Paws Crossed Animal Rescue. And he admitted there are some similarities between the athletes and the animals.

"You think like they're these angry guys lifting all this heavy weight, kinda like that pitbull. And really it's just a lot of love and a big heart that they have. And that's what I'm trying to promote too."