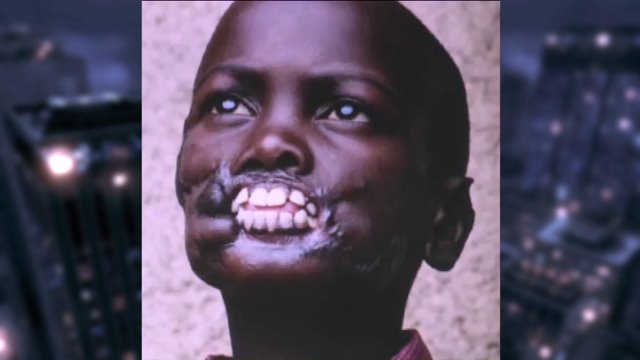 NEW YORK -- Eight-year-old Dunia Sibomana is being called one of the the lucky ones.

Two years ago a group of chimpanzees attacked him and two other boys as they played near a preserve in their native Democratic Republic of the Congo.

The other boys died but Dunia survived, though he was severely disfigured, his lips ripped off and one cheek torn apart, leaving him with muscle damage that make it hard for him to eat, swallow and communicate.

"As you can imagine, not having any lips, the food can just come right out," said Dr. Alexander Dagum at Stony Brook Children's Hospital, where Dunia will undergo the operation. "He drools all the time and can't pronounce different words but hopefully we can change that with the surgery."

The child will start the first of at least five rounds of surgeries on Monday. The first procedure will take at least 8-hours.

The hospital team volunteered it's services and the boy is receiving support for several community organizations on Long Island.

When he was 6, Siboman was playing with his 4-year-old brother and a friend near Virunga National Park in the Democratic Republic of Congo when they were attacked by a troop of chimps. The animals killed the friend, killed and dismembered his brother and left Dunia severely injured.

"Having no lips makes it very challenging for Dunia to chew and swallow food, so he's compensated by tipping his head back to eat. He's also unable to make certain speech sounds with no lips."

The surgery to repair Dunia's lips is very rare, according to Stony Brook Chief of Plastic Surgery Dr. Alexander Dagum, who will lead the team of surgeons who will perform the eight hour operation on Dunia on Monday on New York's Long Island. Another three to five surgeries will follow over the next year.

"A number of surgeries have rebuilt an upper or a lower lip," says Dagum, "and that's easier because you borrow tissue from one lip to rebuild the other. Here we have nothing to borrow from. There's maybe one or two reports in the world of both lips being reconstructed."

The team members, who along with Stony Brook University Hospital are donating their services, will take tissue and nerves from the boy's arm to rebuild the lips.

"This type of surgery is very difficult," agrees Klempner, an orthodontist who will assist in the surgery. "It's not just a matter of just connecting tissue to lips. Dunia's lost muscle, nerve and blood supply to the area, and there's also a lot of scarring. So it's very difficult to bring healthy tissue to that area and have it survive, much less reconnect nerves."

How the attack happened

The boys were playing by a river that flows along the edge of Virunga, the oldest national park in Africa and famous for being the home of the critically endangered mountain gorilla. Many gorillas are orphaned by poachers, and the struggle to protect them from violence is the subject of a 2014 critically acclaimed documentary by executive producer Leonardo DiCaprio.

"Dunia's village seems to be close to the territory of the chimpanzees, and is probably viewed by the animals as their territory," said Klempner. "We think that because of the poaching and violence in the park, all of the primates in the area view humans as enemies."

The boy's father was working in a field nearby but didn't hear the boys' screams over the roar of the river. "And when he went to look for the boys, the first thing he found were dismembered pieces of his younger son," said Klempner. "Then he found Dunia and took him to the park rangers for medical attention."

The park ranger who helped them was Andre Bauma, who actually appears in the "Virunga" documentary playing with his adopted gorillas.

"He brought Dunia's medical condition to our attention," says Klempner. "Those injuries are bad enough. But even more significant is the psychosocial impact of the attack on the boy. He went to school in the Congo for a short period of time after he first recovered, but the kids made fun of him and he became withdrawn and alone. We're hoping he'll gain enough self-confidence from these surgeries to come out of his isolation."

It already seems to be working.

After only five weeks living with his host family in Long Island, 8-year old Dunia is full of energy and often smiling. "He's shed the scarf he wore around his face when he first arrived and has a bounce in his step right now," said Klempner. "He's gone bowling, horseback riding and been in New York City. He's getting quite the experience!"

Dunia is the second child to be helped by the relatively new Smile Rescue Fund for Kids. Klempner founded the organization in 2011 after years of volunteering for organizations that provide free reconstructive surgery to children and young adults in developing countries.

"I saw many children who were so badly disfigured that they were beyond the scope of those organizations to help," said Klempner, who has recently retired to dedicate all of this time to his charity. "So our mission is to help those kids who would normally be turned away."

In 2013, the team provided 10 reconstructive surgeries for a young Kenyan girl, Saline Atieno, who was infected with noma, a flesh-eating bacteria that develops in the mouth and disfigures the face of its victims. The gangrene most often occurs in children between 2 and 5 who are severely malnourished and exposed to unsanitary conditions and contaminated drinking water.

Not only did Smile Rescue Fund for Kids repair Saline's lips and mouth and replace her missing nose, the charity was able to get donations that paid for her boarding school education, room and board back in Kenya.

"We were also able provide water collection tanks in her housing area, so they would have clean water to drink," said Klempner, "as well as hundreds of reading lamps for the kids to do homework at night."

Like Saline, preparing for Dunia's return to his family in the Congo is always on Klempner's mind.

"One of the biggest concerns is that you take a child who has nothing, not even clean water to drink, bring them here and give them a lot of attention and then we have to send them back home," said Klempner. "A big part of helping the kids is preparing for that."