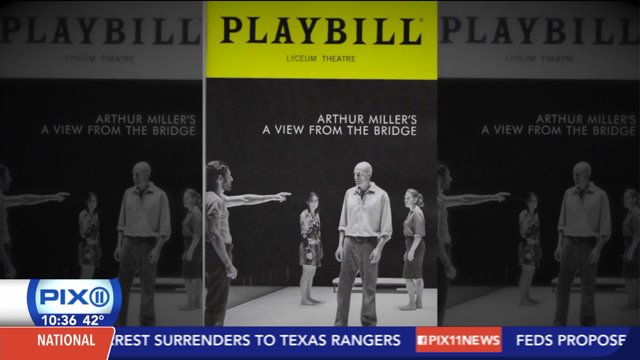 “In the street was a guy getting in a cab and he went Mark Strong and I was walking along and said yeah and he went keep up the good work and then just got in the car and drove off and I was like thank you!" Mark Strong remembered with a smile.

It’s a New York welcome Mark Strong and Nicola Walker were not expecting.

“Here my first day in New York, I was crossing the street and a woman grabbed me on the crossing and then apologized and said I thought you were my friend, but you’re Gillian from 'Last Tango',” Walker laughed.

The two award winning British actors are making their Broadway debuts in the latest revival of A View From the Bridge.

“I was very pleased when we actually achieved the Broadway debut moment, I did feel more nervous about it than had expected," Walker said.

The story, by Pulitzer Prize playwright, Arthur Miller, follows a Brooklyn dock worker who tries to come between his teenage niece and the newly arrived immigrant she falls in love with creating a debate between whether his intentions are sexual or protective.

“He’s an Italian-Catholic who’s promised a dying woman that he’s going to take care of her baby, that is sacrosanct," Strong explained. "The irony is I don’t play the predator element but friends of mine, and others who have seen the place, say, of course, it’s there, and I say, well that’s not what I’m playing but maybe that’s Miller’s genius.”

Miller passed away in 2005---but Strong feels he would be proud of this very modern interpretation.

“I was fortunate to meet him when we were doing ‘Death of a Salesman’," Strong said.  “He would love the fact that his plays have longevity, you know they are about epic themes. they’re about human nature.”

This production comes from London---where it won an Olivier. But being in New York, has given this duo a whole new perspective on the piece.

“I went to Red Hook and the view back of Manhattan is fascinating because I’d always done this thing with Phoebe where I say to her, I want you to be in a nice office somewhere in New York and I’d always pointed and I didn’t really know why and now I have that in my head,” Strong laughed.

Both are also enjoying having their families with them.

“My son’s been here as well, he’s become obsessed with ice hockey," Walker said. "It’s going to be a little bit tricky because when we go home, it’s not a big sport back home!”

“My family is here, so my boys are here and I think my favorite thing is just showing a 10-year-old and an 8-year-old around a whole new place that isn’t their London home," Strong said.

“[The ending] is incredibly moving, and increasingly cold and uncomfortable as the temperatures drop," Walker explained with a smile. "You may hear a couple gasps and crying ha it’s cold." Strong added, "It’s so brilliant the way he’s ended it.”

A View From the Bridge is currently playing at the Lyceum Theater.