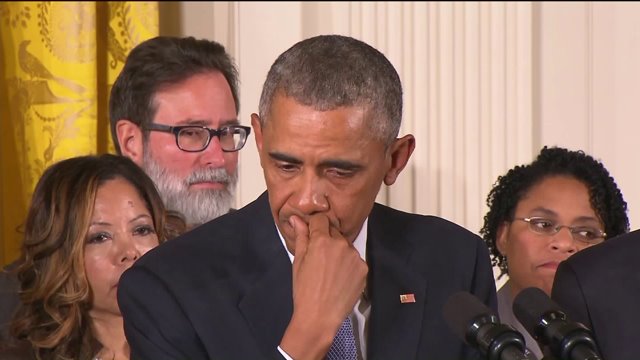 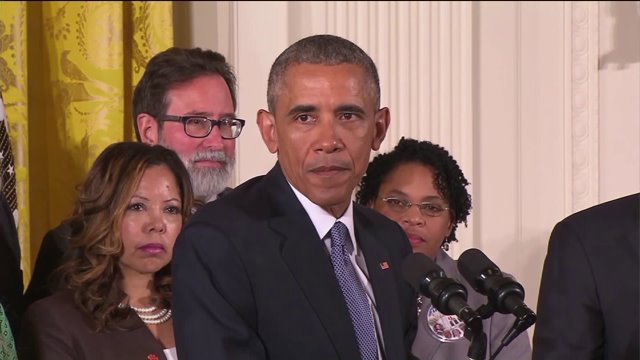 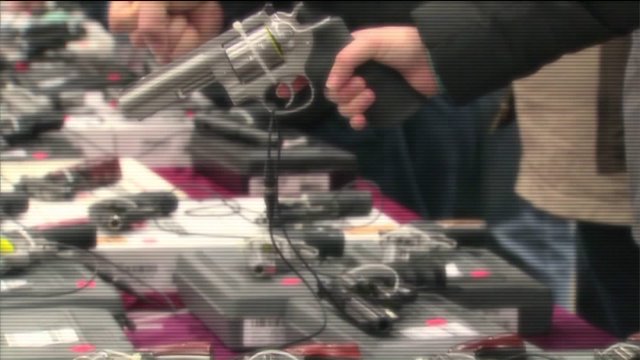 President Barack Obama grew emotional Tuesday as he made a passionate call for a national "sense of urgency" to limit gun violence.

He was introduced by Mark Barden, whose son Daniel was killed in the 2012 massacre at Sandy Hook Elementary School in Connecticut. Obama circled back to that shooting in the final moments of his speech.

"Every time I think about those kids, it gets me mad," Obama said, pausing to wipe away tears.

He added: "And by the way, it happens on the streets of Chicago every day," referring to his hometown where he began his political career.

The White House is introducing a new requirement that would expand background checks for buyers. The measure mandates that individuals "in the business of selling firearms" register as licensed gun dealers, effectively narrowing the so-called "gun show loophole," which exempts most small sellers from keeping formal sales records.

Former Congresswoman and gun control advocate Gabby Giffords, who was seriously injured in a 2011 mass shooting, was also in attendance at Tuesday's event and was greeted with a standing ovation from the White House audience.

Obama hammered congressional Republicans for opposing measures like expanded background checks as he called on Americans to punish them at the polls. He defended his actions to strengthen background checks for purchasing guns, answering critics who say the measure would not make it harder for criminals to obtain firearms.

The President blasted the gun lobby, particularly the National Rifle Association, and insisted that his actions are "not a plot to take away everybody's guns."

He compared his push for gun control to steps the United States and businesses have taken to limit traffic fatalities, require fingerprints to unlock iPads and keep children from opening bottles of aspirin.

"I believe in the Second Amendment, there written on paper, that guarantees the right to bear arms," Obama said. "No matter how many times people try to twist my words around, that's our constitutional law. I know a little bit about this. But I also believe that we can find ways to reduce gun violence consistent with the Second Amendment."

Obama said Congress, which blocked a tougher gun bill in 2013, still needs to impose new gun control measures. He noted that many of the actions he's calling for can only be imposed through legislative action.

"Congress still needs to act," Obama said. "The folks in this room will not rest until Congress does. Because once Congress gets on board with common-sense gun safety measures, we can reduce gun violence a whole lot."

"But we also can't wait," Obama added. "Until we have the Congress that's in line with the majority of Americans, there are actions within my legal authority that we can take to help reduce gun violence and save more lives."

In addition to expanding and bolstering the background check system, the administration is also expected provide more funding for mental health treatment, FBI staff and the Bureau of Alcohol, Tobacco Firearms and Explosives agents.

Many polls have found broad support for expanded background checks -- the most recent being a Quinnipiac University poll in December. In that survey, 89% overall support it, 84% in gun-owning households, 87% of Republicans, 86% of independent, 95% of Democrats.

In a December CNN/ORC poll, 48% of Americans said they were in favor of stricter gun control laws, 51% were opposed.

Support for stricter laws has been less than half since 2013. There's a sharp partisan divide on the question, with 74% of Democrats in favor of stricter laws, while just 23% of Republicans feel the same way.

Just 35% approve of Obama's handling of gun policy, including 56% of Democrats and 55% of liberals. That's well below his approval rating among Democrats/liberals for other top issue