VIDEO: NJ school bus erupts in flames with students aboard 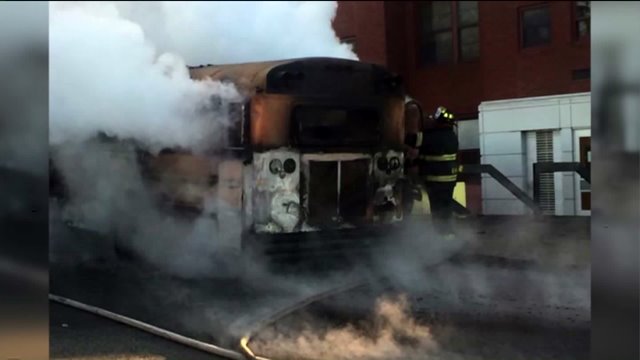 NEWARK, N.J. - The track team at Malcolm X. Shabazz High School sprinted away from the school bus they were sitting on after their coach spotted flames shooting out from underneath.

“And as everybody jumped off the bus and came out, the whole bus caught on fire,” said Coach Damon Harrison.

An assistant coach, the bus driver and 32 students were on board at the time. The team was waiting on the bus outside Shabazz High School on Sunday, preparing to leave for the Essex County Relay Championship.

Harrison saw the fire from outside, when he went to get something from his car. He said the bus was engulfed just seconds after students escaped through an emergency exit.

“It would have turned out different if I didn’t see it from the outside, like we probably would have been missing some children right now.”

Some of the team’s gear was destroyed in the fire, but they still made it to compete in the relay on Sunday.

“I had kids sharing uniforms and sharing spikes while they were running. One kid ran the 200 and then took his shoes off and gave it to another kid and he had to finish the race with somebody else’s shoes,” said Harrison.

He said the team finished 7th in the county.

Eghan Transportation was the company posted on the side of the school bus. A message left for the company was not returned on Monday.