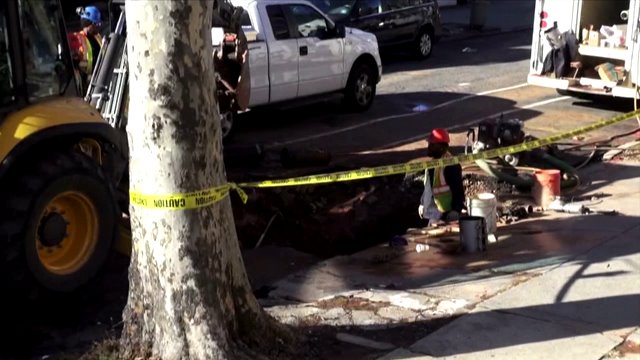 JERSEY CITY, N.J. — Residents on Neptune Avenue near Kennedy Boulevard woke to find their street buckling due to water pressure at around 3 a.m. this morning.

“I looked out the house and I saw a river coming down this way,” said Robert Scollan, a volunteer fireman who lives on Neptune Avenue.

Water erupted through a burst 8-inch water main, as well as through several other spots where the pavement ruptured.

“The police were getting worried that the street might buckle in over here, so to start moving cars,” said Scollan.

Almost one-hundred families in the neighborhood were impacted when the utility shut off the water to make repairs on Sunday.

“I used spring water to brush my teeth,” said Betty Bell, another resident of Neptune Avenue.

Suez workers lowered a new pipe down below the street early this afternoon, and they told residents that they could expect the water back on by 3 p.m.

But residents are wary that the system may have been stressed enough to cause another break. There have been 3 main breaks in Jersey City in the past 3 days.

Before the break this morning, a 12-inch main broke on New Year’s Day on West Side Avenue near Pollack Avenue. That break flooded the area and triggered another break in the same neighborhood yesterday.

“Because of Jersey City being so old and rustic, as they would say, you know these pipes, you never know when the next one is gonna happen. And it’s only a matter of time until the next one happens,” said John Pascarello, who lives on Neptune Avenue.

In neighboring Hoboken, old pipes have proven weak as well. Mains there broke 2 days in a row in late November, flooding the west side of downtown and leaving many without water leading into Thanksgiving. Then, on Thanksgiving Eve, a valve burst on the border of Hoboken in Jersey City, compounding the problem and prolonging repairs in Hoboken.

Less than a full week passed before another main broke in Hoboken, flooding one home and closing businesses on Monroe Street near 1st Street.

As new buildings rise rapidly in both Hoboken and Jersey City, many local lawmakers and residents have criticized the pace of investment in the water lines below.