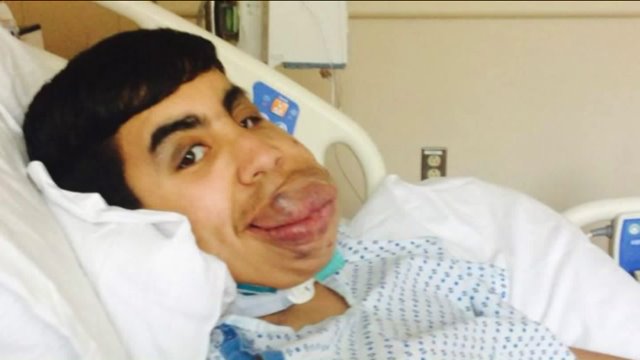 UPPER EAST SIDE, New York -- A Moroccan teenager no longer has to worry about a life-threatening facial growth.

The 18-year-old, Zoubir Lahdodi, loves stunt bike riding but a fall could have killed him.

He dreamed of coming to the United States for surgery but his family could not afford it.

On Monday, Zoubir presented his new face. Doctors at Lenox Hill Hospital on the Upper East Side performed seven major surgeries on Zoubir over the past eight months.

Zoubir spoke through a translator Monday.

"He feels great and he feels very thankful to Dr. Waner who brought his life back."

Dr. Milton Waner and a team of doctors from Lenox Hill Hospital took on this case for free.

"He is now in a position where he is no longer a ticking time bomb. He is in a much safer situation. He looks a lot better," Waner said.

Zoubir had what's called a venous malformation. The facial growth was filled with abnormal blood vessels. Any trauma to his face, like a fall from his stunt bike, could have caused him to bleed to death.

The disfigurement made eating, speaking and even breathing hard. Zoubir told reporters he feels reborn.

"He can go be like normal kids in the street. No one is going to point at him again," his translator said.

Zoubir said his mother used to cry every day for him. She told PIX11 there will be "no tears anymore."

The doctors presented Zoubir with a new bicycle and helmut to use when he returns home to Casablanca.

He said he is looking forward to hugging his father, going to school and learning English.

Zoubir Lahdodi is expected to return to New York for more procedures and corrective plastic surgery, but his life is no longer in danger.