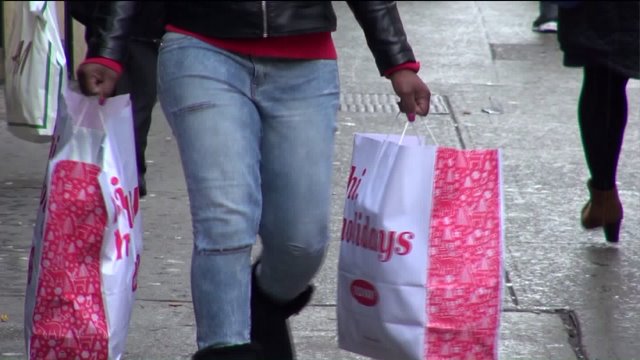 If you haven't finished your Christmas shopping you're not alone— each year millions of people are still searching for a few more gifts on Christmas Eve.

Right up until the last minute you can bet people will continue to pack stores like Macy's in Herald Square looking for that perfect Christmas gift for the hard to please person on their list.

"My dad," said shopper Christine Meehan.  "It's just he has everything, so it's like finding that nice thing that he doesn't already have."

Dealing with those crowds leave many people seeing red, and we're not talking about Santa.

"There's long lines everywhere," said Meehan.  "It doesn't matter what line you stand in, there's always going to be a wait."

"A lot of work to do man," said Rivera.  "Especially with kids."

"A lot of people are talking about about Christmas, there's a lot of stress and anxiety in the air," said Psychologist Carolyn Alroy.  "I think that people respond to that.  It kind of scrambles your brain.  It's hard to think sometimes when all that external noise is going on."

Dr. Alroy says that the "jingle bell" atmosphere can shake up shoppers around the holidays. And that stress to find the perfect present gets amplified as the clock counts down.

"There's a lot of talk about it, what are you going to get people, and I think that a panic ensues, especially if you haven't gotten anybody a gift yet."

"If they've already gotten you something, then yeah, the pressure is on," said Meehan.

Some people try to solve that problem by throwing money at the gift.  But Alroy says that can be very unfulfilling and leave you with extra holiday debt that will increase your stress after the season.  Instead she recommends using your skills to draw on an aspect of your relationship with that person.

If you're still not sure what to get them, she suggests going shopping with the person to see what they gravitated toward.
And ultimately she reminds shoppers that it really is the thought that counts.

"I think you have to be very confident in your gift giving and know that if you're giving a gift from your heart and somebody looks down on it, then it's really their bad," said Alroy.