The day death rained on New York: 56 years ago a midair collision sent a TWA jetliner hurtling into Park Slope 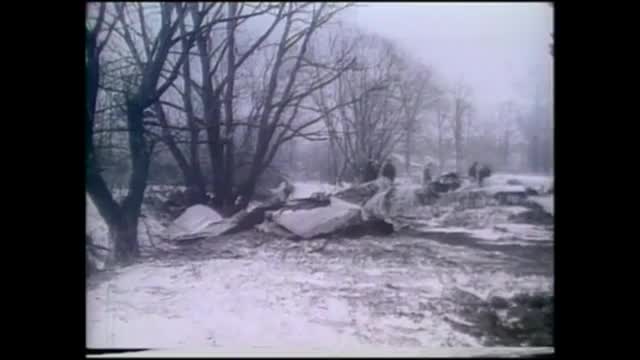 NEW YORK – It was a crisp, wintry day. A thin coating of snow covered the streets. It was the end of the week, just nine days before Christmas and the city was filled with the bright spirit of the holiday.  But that Friday, Dec. 16, 1960, would be remembered as one of the darkest days in the city’s  history.

It was the day death rained from the sky when two passenger planes collided over the eastern edge of Staten Island – one, a propeller-powered TWA Super Constellation with 44 aboard, and the other a United DC 8 jet carrying 84 people.  The TWA plane crashed into a field on Staten Island, while the jetliner plummeted into the intersection of Sterling Place and Seventh Avenue in Park Slope. The street was turned into a raging inferno.  Six people on the ground were killed instantly.  It was the worst civil aviation disaster to date in aviation history.

Hundreds of miles to the west, I was a fledgling reporter at a radio station in Columbus, Ohio.  I broke into regular programming with bulletins about the disaster in New York, where I had been scheduled to visit that weekend.

I quickly realized that I had an emotional attachment to the story.  Had it not been for a colleague’s drinking problem, I would have been on TWA Flight 266 that morning, a non-stop flight from Columbus, Ohio to New York.  I had been looking forward to spending a long weekend with my family, but my news director refused to let me leave on that Friday because he assigned me to cover the overnight shift of a colleague he suspended because he was drunk. “Leave on Saturday,” he said “and take an extra day Monday.”  I booked a seat on TWA Flight 266  for the following morning.

During my flight to New York, I could feel the anxieties overcome my body.  Despite the disaster, the number of the flight had not been changed.  Passengers gripped newspapers with bold headlines of the tragedy.  I scribbled notes during the flight, notes that are now yellowed and faded from age.  But the memories of that day remain quite vivid.

After picking me up at the airport, my parents drove me to the scene in Brooklyn.  I flashed my local Ohio press pass and police gave me access. The scene was surreal.  Twisted and mangled chunks of a once sleek airliner littered the street.  Parts of the landing gear lay beside a small tree, an overturned car was crushed. I walked across the water soaked and scorched carpet of the jet’s fuselage. Seats were torn from their mountings. There was a gaping hole at the Pillar of Fire Church that was struck by the plane as it plunged to the ground.  But out of the tragedy, there was one glimmer of hope ... a miracle.  Stephen Baltz, 11, flying home alone to see his grandmother for Christmas, was the only survivor. A flight attendant grabbed the boy and held him in her lap as the plane hit the ground.  He was thrown from the plane and landed in a snow bank, badly burned, but still alive.  As I was standing amid the wreckage, absorbing the magnitude of the disaster, a producer with CBS  who  I had gone to college with, informed me “The boy has died.”

As I looked around, I felt the grief that had overwhelmed us all that day. Long before the days of cell phones, I looked for a phone booth  so I could file a report for my radio station back in Columbus.

55 years later I still reflect on that day---the devastation, the anguish on the faces of   emergency workers still at the scene. And I will never forget the contrasting cheers of my colleagues in Columbus who toasted me at the company Christmas party that fateful day, delighted that my weekend plans had been changed because a colleague got drunk and I had to work his shift.

Each anniversary serves as a reminder of how fortunate I was to not be on Flight 266 that day.  And  more than five decades later I try to avoid flying anywhere on Dec. 16.