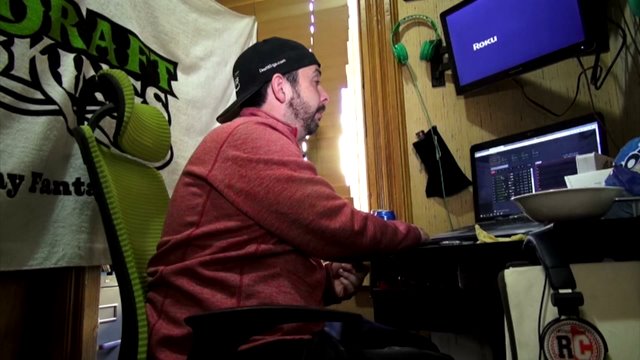 WEEHAWKEN, N.J. -- You’ve probably seen their ads -- daily fantasy sports companies DraftKings and Fanduel have both been valued at around $1 billion.

But for one father of three in New Jersey, it’s become a full-time profession.

“The good thing about this is I can kinda make my own hours. So I’m around to be around for the kids,” said Benjamin Ricciardi, seated in a small home office that’s outfitted with four screens.

Ricciardi says he spends 50-60 hours per week creating fantasy teams, writing about or talking strategy for some of the biggest web sites in the business. He writes for DraftKings and puts out podcasts on Rotowire.com.

If you’re unfamiliar with fantasy sports, this is how it works: you put together an imaginary team of real athletes, and compete with another team based on the statistical performance of your players in real games.

Ricciardi says he wins enough to pull in five figures per year. He says that’s more than he earned working in finance.

“The way I look at it is I try to win a little bit at a time,” he said, "I’m not trying to everyday win a million dollars, because if you try to do that, more often than that your gonna wind up broke.”

He says the best way to lose is to not do any research on the athletes before assembling a team.

Although an estimated 56 million people are wagering bets on fantasy teams in the United States and Canada, according to the Fantasy Sports Trade Association, it should be noted that most are not able to collect a full-time salary doing it.

“It’s a skill that you can get better at,” adds Ricciardi, "I kind of compare it to chess.”

Others say it’s gambling and should be regulated as such.

New York Attorney General Eric Schneiderman sued to stop DraftKings and FanDuel from operating in the state. Internet gambling is illegal in New York. A judge agreed to the ban, before a state appeals court put New Yorkers back in the game.

A final decision is expected next month.

Meanwhile in New Jersey, internet gambling is allowed. But lawmakers here have called on the Federal Trade Commission to ensure there is an equal playing field for all.