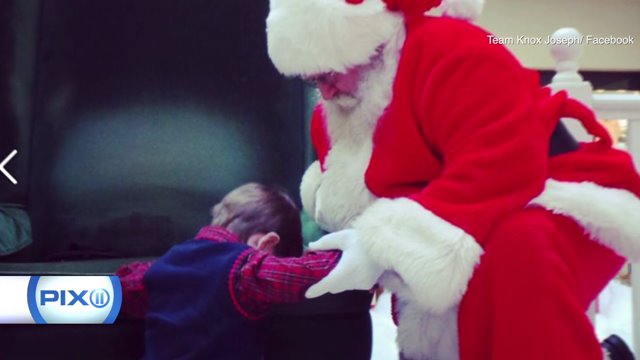 A new train set and some divine intervention.

Those are the only two items on 4-year old Prestyn Barnette's wish list this year. And he's hoping that a prayer from Santa might give him a boost.

The viral photo shows the moment little Prestyn got down on his knees to pray for 2-month old Knox, a baby he's never met before who lives across the country.

Earlier this month, baby Knox's family sent out a request for prayers on Facebook after he was found unresponsive and had stopped breathing.

Knox’s father performed CPR until paramedics arrived and rushed the baby to a Sunrise Children's hospital in Las Vegas where he remains.

The baby suffered severe brain damage and doctors weren’t sure he was going to survive.

Prestyn, who is from South Carolina, found out about the baby in need because his grandmother belongs to the Facebook community group for Knox.

And so when Prestyn met the big man in red, he asked if he would pray with him for a little baby who needed help to get better.

Knox's mom said she was touched by the photo, which shows that even the smallest gesture can make a big impact.