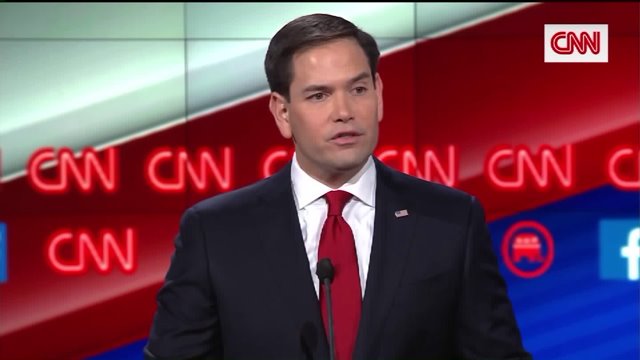 LAS VEGAS (CNN) -- Donald Trump is under fire at tonight's CNN presidential debate, a prime-time event dominated by national security and the fight against ISIS.

Jeb Bush, the former Florida governor whose campaign is floundering, appeared most eager to hit the GOP front-runner. The two men exchanged tense words on Trump's plan to temporarily ban Muslims from entering the United States as well as his recent vow to go after family members of ISIS terrorists.

The latter, Bush said, was "another example of (Trump's) lack of seriousness."

"The idea that this is a solution to this is just crazy," Bush said. "It makes no sense to suggest this."

Trump, visibly annoyed and at one point could be seen mouthing, "Give me a break," delivered his usual attack line on the ex-governor: that he is simply too nice.

As Bush interjected, Trump taunted: "You're trying to build up your energy but it's not working."

Bush shot back: "Donald, you're not going to be able to insult your way to the presidency."

Meanwhile, the increasingly public rivalry between Marco Rubio and Ted Cruz spilled into the open. The senators tussled over National Security Agency surveillance and the USA Freedom Act, which made it more difficult for the government to access people's phone records. Cruz voted for the bill that President Barack Obama signed into law. Rubio, who voted against the act, said Cruz was wrong to have supported it.

"Here's the world we live in. This is a radical jihadist group that is increasingly sophisticated," Rubio said. "We are at a time when we need more tools, not less tools."

Rand Paul also went after Rubio, saying his colleague had "opposed at every point increased security." The Kentucky senator said Rubio's work on the "Gang of Eight" immigration reform bill showed his allegiance to Democrats.

The GOP debate comes in the aftermath of deadly terror attacks that shook Paris and San Bernardino, California -- events that have shaken the narrative and focus of the 2016 presidential campaign.

The critiques of Trump were previewed in an earlier so-called "undercard" debate that preceded the main event. Four lower-polling White House hopefuls kicked off the evening by raising alarm about the threat of radical Islam -- and went after Trump for the Muslim proposal.

"You may think this makes us safe, but it doesn't," said South Carolina Sen. Lindsey Graham, one of Trump's most vocal critics. "Donald Trump has done the one single thing you cannot do -- declare war on Islam itself."

But Santorum blasted a culture of political correctness that he faults for blunting debate over the role of Muslims in society.

"Not all Muslims are jihadists," he said. "All jihadists are Muslim."

Santorum and Graham -- who dominated the discussion -- were joined by former Arkansas Gov. Mike Huckabee and former New York Gov. George Pataki. All four are polling in the low-single digits, and risk being next on the chopping block if they're unable to gain real momentum soon.

On stage at the Venetian theater, Trump is flanked by Cruz, the Texas senator whose poll numbers are on the upswing; and Ben Carson, the retired neurosurgeon whose political standing has been damaged by a series of gaffes.

The stakes are higher than ever for the White House hopefuls, as they eye the Iowa caucuses now just seven weeks away and adjust to new political dynamics in the aftermath of ISIS-inspired terror attacks. The anxiety in the wake of those attacks was evident on Tuesday when public schools in Los Angeles took the unprecedented step of closing in response to what the superintendent called a "rare" threat.

Meanwhile, Cruz is now threatening Trump's months long front-runner status in Iowa, with polls showing the senator either neck-and-neck with or ahead of Trump in the state. But the candidate has shown little appetite for publicly engaging Trump.

Trump remains the undisputed national GOP presidential front-runner. A Monmouth University poll on Monday placed him at 41%, the first time he's cracked the 40% threshold in a national survey. A poll from The Washington Post and ABC News conducted entirely after Trump proposed the Muslim ban found support for Trump at 38% of Republicans and Republican-leaning independents -- up six percentage points from a Post/ABC poll in mid-November.