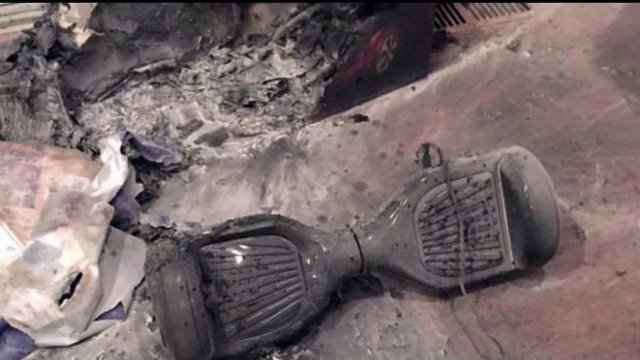 WESTCHESTER – 'Hoverboards' are the hottest holiday gadget of the year – now they are literally bursting into flames.

Chappaqua fire officials are warning residents not to leave hoverboards plugged in after one of the devices torched a Westchester living room.

According to the fire department, the owner was charging the hoverboard when it malfunctioned and caught fire, charring the floor below.  No one was hurt in the incident, and someone was home to extinguish the blaze.

For fans of "Back to the Future," the 'hoverboards' of 2015 won't take you across a pond – they actually just roll along the sidewalk on two wheels, accelerating as the user leans forward.  Despite the inability to hover, they retail for hundreds of dollars.

The upstate fire is just the latest reported case of the highly-coveted items catching fire – a Washington state mall was evacuated after a hoverboard exploded and shot across the floor.

Five days before Thanksgiving, a Louisiana family lost their home after a "Fit Turbo" caught fire and destroyed the house in the process.