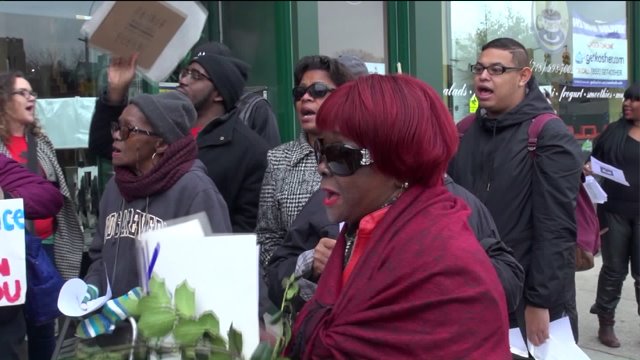 CROWN HEIGHTS, Brooklyn – For more than a year tenants at two Crown Heights buildings have been fighting rent increases.  Increases that would price them out of homes many of them have lived in for more than 20 years.

"These rent increases are so ridiculous," said Jorge West who has lived at 285 Schenectady for more than 20 years. "They have tenants that they're increasing their rent by 30,50, even 100-percent.  Rent that we cannot afford."

Wednesday, the tenants took the fight to their landlord's office in Midwood. The tenants and their supporters say the buildings were meant to be affordable housing, but when the previous owner sold the buildings to Renaissance Realty, the rent protections weren't written into the deal allowing the new owners to raise the prices.

"Most of us have 1- or 2-year leases and if you didn't sign your lease before they took over, the new management sent us new leases for double or triple our rent in most cases," said Walter Simpson who lives at 1646 Union.

Some tenants have already been evicted after unknowingly signing the new leases.  Others are being sued.  But tenants are fighting back as the landlord tries to take them to court.

"We would like them to sit down with us and actually come to an agreement and let us stay in the building at an affordable rate," said Simpson.

Assembly member Diana Richardson says the city has offered the landlords incentives to prevent them from raising the rate so drastically, but so far the owners haven't been willing to budge. We tried calling Renaissance Realty to get their side of the story, but the person who answered told us no comment and hung up.​

"Renaissance Realty we are not going anywhere," said Richardson. "We will come here everyday if we have to.  Being a predatory landlord and using preferential rents to displace tenants in my district is not going to work."

The New York State Supreme Court is currently considering an appeal on the validity of the landlords actions.  But in the meantime Crown Heights residents say they won't be forced out by this landlord or any other in the future.

"So it's Renaissance today and another one tomorrow, but we will not be displaced," said Natherlene Bolden of the Crown Heights Tenant Union.