Backstage on Broadway: Jackie Hoffman, Hunter Ryan Herdlicka talk ‘Once Upon A Mattress’, give back this Thanksgiving 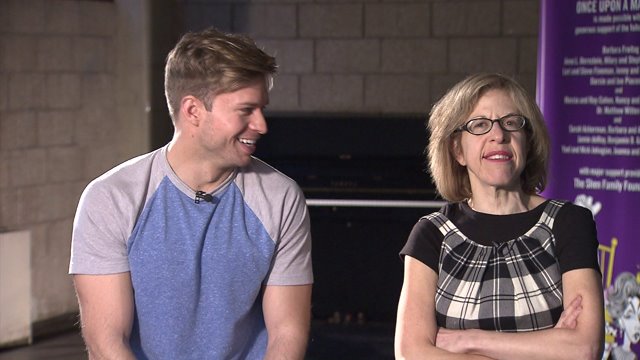 In this week`s Backstage on Broadway, PIX11 sits down with Jackie Hoffmana nd Hunter Ryan Herdlicka to discuss their new show `Once Upon a Mattress` and what they`re doing this Thanksgiving.

“Come down to the show to see this!” Jackie Hoffman smiled.

“It is such a fun show, it is going to be hilariously funny," she said,

The longtime comedic actress, most recently seen in On the Town, is talking about her new off-Broadway musical, a revival of the Tony-nominated Once Upon A Mattress.

“I’m the Princess, I’m a goofy, wacky, fun-loving down to earth who comes to a kingdom run by a stuffy queen,” she expl “and i just turn the place upside down”

“it’s a re-telling of the Princess and the Pea," Hunter Ryan Herdlicka said. "[It was] created in the 50s [and] the career of Carol Burnett.”

Hunter Ryan Herdlicka takes on the role of the Minstrel.

“Which is like the narrator of the show," he explained. "A musician who is a wanderer and comes into the kingdom and has all sorts of sub plots.”

The show hasn't been on a New York stage since 1996, when Sarah Jessica Parker starred on Broadway. Now you can see it in a more intimate setting at the Abrons Arts Center on the Lower East Side.

“It’s nice to be away from people in minion suits and a million tourists," Hoffman smiled.

And this week, they get a little bit of a break for Thanksgiving.

“Thanksgiving has always been a special time for me because of big, family traditions in Dallas," Herdlicka said. "But because I’m in a show this year, my family is actually coming up here for the holidays.”

“It was always getting up and watching the parade on TV," Hoffman remembered of her childhood growing up in New York. "It’s a great family time, it’s American without being religious so there’s a minimal amount of guilt involved.”

But Hunter is also giving back this holiday, spending his morning with the charity "God's Love We Deliver."

“I’m actually going with meals and knocking on people’s doors and going in their house," he said with a big smiled. "I get to hand them to them and it’s amazing, I’m most excited about meeting the people, and hearing their stories.”

Jackie, who also volunteers year-round, is heading out to Long Island to spend the whole day with her family.

And they hope to bring that holiday spirit to families who come to see their show.

“I think the best thing about it is that it's a Broadway show, with a Broadway type cast, a huge orchestra and tickets aren’t Broadway prices,” Hunter said.

“There’s stuff the kids will get and there’s stuff that they won’t get which is my favorite stuff," Hoffman joked. "But bottom line is everybody’s going to have a great time.”

Once Upon A Mattress is running through January 3, 2016.