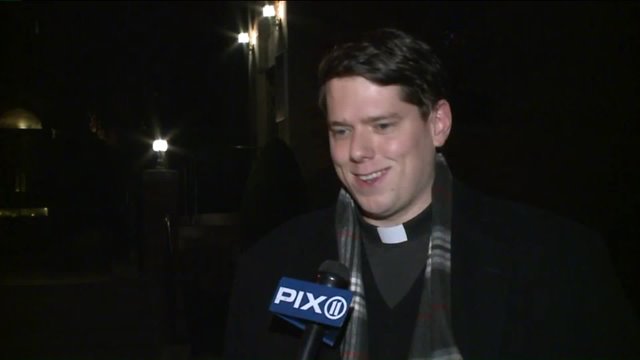 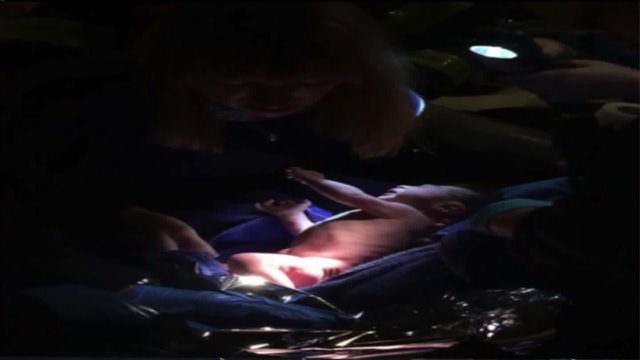 RICHMOND HILL, Queens -- A newborn boy was left in the  manger of an indoor nativity scene at the Holy Child Jesus Church in Queens Monday afternoon, police say.

The baby boy was found around 1:30 p.m. inside the Richmond Hill church.

The custodian who found the infant told police the manger was empty when he left for lunch and when he returned, he heard a baby crying.

"He was wrapped in, for lack of a better word, swaddling clothes," Father Christopher Ryan Heanue said.

The baby was found inside the manger, with its umbilical cord still attached.

Father Heanue called 911 immediately and EMS transported the baby to Jamaica Hospital where he is listed in good condition.

“I just thought of the mother and the baby being left there was really sad," said parishioner Kevin Shiner. "I couldn’t imagine leaving my baby - but you have to think - what was she really going through?”

The police are looking for the mother, who they believe left the baby.

"I believe that when this woman came into our church to find refuge, she found in this nativity scene a place for her son a place where he would be safe," Father Heanue said.

Bishop Octavio Cisneros says one of the church's surveillance cameras caught who they think is the baby's mother, walk in and leave her newborn baby boy.

“My thoughts are for the woman - for the mother. How must she feel? And the care she had for the baby. She just did not abandon the baby on the sidewalk, on a garbage can. She did not treat the baby in a way that it was going to be harmed,” said the Bishop

Under the New York State Abandoned Infant Protection Act, also known as the safe haven law, an infant can be left anonymously at a safe location within 30 days of birth so long as the baby is left in safe conditions.

These locations include churches, hospitals, police stations and fire stations. However, the law requires that a suitable person be at one of the locations, alert authorities and stay with the baby until he or she is safe.

"God works in mysterious ways," Father Heanue said, as the nativity scene was not even meant to be set up for another few weeks, "this was an act of God's divine providence."