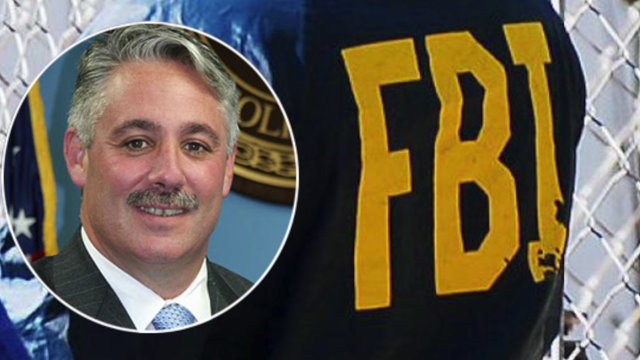 SMITHTOWN, N.Y. — The police commissioner of one of the nation's largest police departments announced on Monday that he's retiring – in the midst of a federal probe of his department and a list of other key retirements among his ranks, to which his name is the latest to be added.

It's the newest development among many PIX11 News has learned in the case of the Suffolk County Police Department.  The situation is expected to lead to people sworn to fight crime in the eastern Long Island county becoming indicted as criminals themselves, and possibly at the highest levels.

The probe stems from an incident on December 14, 2012. Cops arrested Christopher Loeb, then 26, at his home in Smithtown.  He had broken into an SUV in the nearby village of St. James, and had stolen a duffel bag hours before. When he got the bag home, he discovered, based on the contents in it, that it belonged to a cop. It belonged to the county's top cop, Suffolk County Police Chief James Burke.

"That is all a fantasy," Chief Burke's attorney, Joseph Conway, has said in the past regarding Loeb's allegations.  Conway and Burke have stood by those statements.

Now, however, federal investigators do not appear to consider Loeb's allegations to be fantasy.  In fact, they may be integral to toppling the leadership of the department that arrested him.

PIX11 News has learned that the contents of Chief Burke's bag the night that it was stolen are a central part of the federal investigation of the chief.  Illegal pornography may have been contained in it.

Also, the chief had shown up at Loeb's house during his arrest -- a department violation -- and minutes later, Chief Burke  encountered the arrestee at the nearby Fourth Precinct.  Loeb has testified that at the police facility, he was chained down, and beaten by Chief Burke in places on his body that would not show up in the mug shot cops took a full ten hours after Loeb had been brought in.

Loeb had also said that another man beat him up at the police precinct.  He said that detective Anthony Leto not only struck him, but had also threatened to rape his mother.

Leto has now filed for retirement, and so have other officers who'd been present at Loeb's arrest and/or interrogation, including Kenneth Bombace, a veteran of both the Suffolk County Police Department and Sheriff's Office.

Joining them late on Monday afternoon was Suffolk County Police Commissioner Edward Webber.  He announced his retirement after 43 years on the force. By request of county executive Steve Bellone, Webber will remain his position for two more months, until a replacement for him can be found.

Chief Burke has also filed for retirement, and will step down in a week.  PIX11 has learned from sources knowledgeable of the investigation that Burke may face more than 100 criminal counts in a federal indictment against him.

Burke is not expected to be the only person indicted, but sources tell PIX11 News that some of the officers and detectives who had been with Chief Burke when Loeb was arrested have changed their stories from nearly three years ago, and are working with federal prosecutors.

Some of the cops who'd been present for Loeb's arrest may have also worn recording devices that have captured invaluable evidence against Loeb and others.  The potential for indictments in Suffolk County could go high up the masthead, according to sources knowledgeable of the investigation.