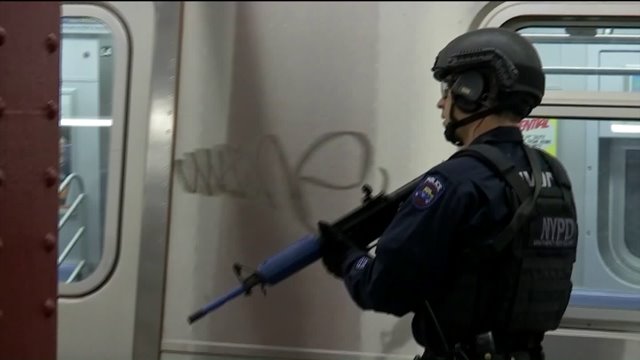 NEW YORK — Gunfire, cries for help, heavily armed response teams, mass casualties.  It all looked and sounded so real.  But it wasn’t.

The blood was fake. The bullets were blanks.

The NYPD conducted two terror drills Sunday morning in an abandoned portion of the Bowery subway station in Lower Manhattan.  In each of the simulated active shooter situations, there were two shooters, and all four were killed.

“The actors here today, the first responders, knew they were going  into an active shooter situation.  But other than that, they had no information as to what they were going to encounter,” said Police Commissioner Bill Bratton.  “These exercises are vitally necessary, particularly in light of all that’s going on in the world at this point in time.”

“This was an impressive display of the capacity of this city to respond to an incident,” Mayor de Blasio said. “This is why this city is so fundamentally prepared for any situation.”

The underground exercises funded by the Department of Homeland Security were planned a year ago.  But after the terror attacks in Paris, another element was added.

“We introduced at the very last minute one of the individuals, a shooter, with a suicide vest,” said NYPD Counterterrorism Chief James Waters.

Also present at the exercises was Homeland Security Secretary Jeh Johnson.  He said while his department knows of “no specific credible threat of a Paris-like attack directed against the U.S. homeland,” there are concerns.

“We are, and continue to be, and we have been concerned about copycat-like attacks,” Johnson said.

But he encouraged Americans to continue to travel  during the holiday season, and to go to public events and places.

“Terrorism cannot prevail if the people refuse to be terrorized,” he said.