Turning to acupuncture for pain relief 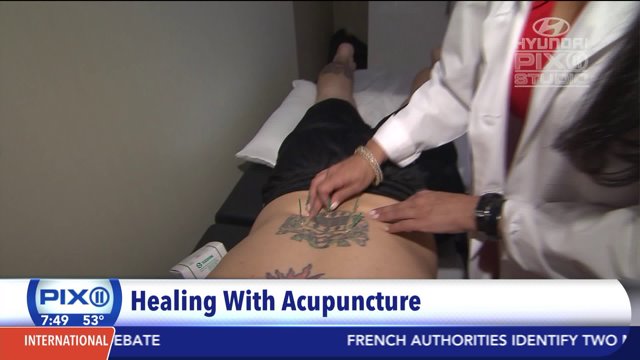 More than 100 million Americans are suffering from chronic pain at any given time, and with the increasing knowledge of the danger of addiction to prescription pain killers, many are looking for other ways to cope with that pain.

Enter the ancient art of acupuncture.

Extreme athlete Eric Finn is the poster child of pain as a dedicated base jumper. He pays the price of his love of living on the edge.

“I’ve broken my ankle ... both meniscus in knees, wrist, elbow, three ribs, fingers,” he said, pointing to all his areas of breaks.

Finn has broken more bones than he can count, and proudly shows the scars of his spinal surgeries. Yet where physical therapy and chiropractic and pain pills have failed, he’s found an unlikely partner in his humpty dumpty style quest to keep him together.

Needles, and lots of them.

More specifically acupuncture needles, put in just the right places, to stimulate healing, and kick his pain to the curb.

"After each treatment, I keep getting better. I can’t imagine life without it,” Finn said.

Those are words Dr. Juhi Singh, an integrative medicine doctor, says she hears often from patients frustrated after travelling a road of traditional western therapies that often can’t get to the root of a patient’s pain. She says her needles, hair thin, inserted in the correct areas help direct the body’s natural processes to do what they need to fix a patient’s pain.

While Singh knocks out Finn's aches, she’s also sneaking in some overall full body wellness, by checking one of the 27 pulses she reads. That’s where she finds out the rest of a patient’s issues, often kept hidden.

“I’m figuring out what else is going on in the body, if there’s migraines, digestive issues, stress, anxiety," she said.

Finn admits he’s no fan of needles, but his views on the practice have changed.

“I was a huge skeptic of acupuncture. I’ve learned a lot to not be skeptical of things i don’t know about,” he said after revealing just under three months of treatment, he’s able to make his body work. “She’s made it actually so I can get out of bed so I’m not in pain."