Key witness who helped convict ‘Grid Kid’ murderer emotionally recants, but it may not free convict 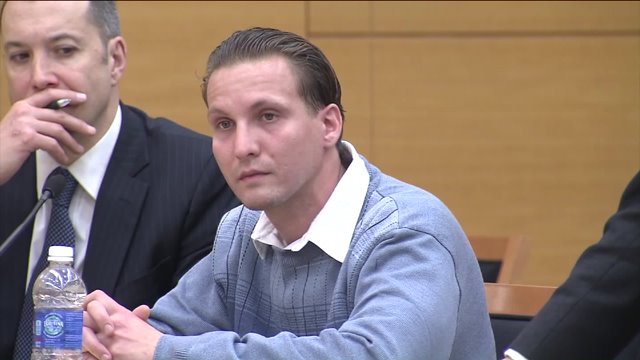 DOWNTOWN BROOKLYN — He's been behind bars for more than a decade, convicted of a high-profile murder that he, and hundreds of supporters, say he didn't commit.  But now, a key witness who helped to convict so-called Grid Kid Murderer John Giuca, came back to court on Monday and did an emotional about-face.

However, his confession is just the beginning of a journey to try and get Giuca's conviction overturned, and there is no guarantee that it will happen.

Giuca, 32, has been dubbed the Grid Kid Murdrerer because he was convicted in 2005 of being one of two young men who killed a gridiron hero, Fairfield University standout Mark Fisher.  It happened in the early morning of October 12, 2003, after both had attended a party in Brooklyn.

One of the most important witnesses at trial, whose testimony led to Giuca's conviction, was John Avitto, 48.  He was a robbery and drug crime convict who had befriended Giuca in jail,  while Giuca awaited trial.  During trial, Avitto was a witness for the prosecution, and testified that Giuca had told him behind bars that he'd gotten the gun to murder Fisher.

However, on Monday, once again under oath, Giuca's attorney asked Avitto if his statements that led to Giuca's conviction were true or false. "False," Avitto replied. "Did you lie about it?" Giuca's lawyer, Mark Bederow, asked. "Yes, I did," Avitto replied.

Avitto also admitted to a long history of crime to pay for a heroin and cocaine addiction, for which he'd skipped probation.  He said that in exchange for leniency in his own criminal cases, he'd made up evidence against his one-time friend behind bars, John Giuca.

"I apologize," Avitto said from the witness stand, looking squarely at Giuca.  "I am deeply sorry."

Giuca, who's been behind bars 11 years in relation to the murder of Fisher, had welled up eyes as he heard the apology and confession.

He'd recently given a prison interview that aired on PIX11, in which he spoke about Avitto's change of heart.  "All I could say when I found out," Giuca said, "is, 'Wow,  there is a God.  I was just so glad that they had the courage to do this."

Avitto came forward in large part due to the efforts of Jay Salpeter, a private investigator who has in multiple high profile cases, including those of Martin Tankleff and the West Memphis Three,  helped to get wrongfully convicted people set free.

"The man has been in jail all these years for a crime he didn't commit," said Salpeter about John Giuca, "based on a drug addict that the D.A. played with."

Giuca's mother, Doreen Giuliano, has been written about extensively for taking on a separate identity after her son's conviction, and dating -- as well as recording -- a juror who confessed to her that he'd know. her son before trial.  He also told her that he'd chosen to convict Giuca because he'd thought he was Jewish, and that he'd hated Jews.

Giuliano told PIX11 News at court on Monday that she's optimistic about Avitto's confession.  "I give that man a lot of credit," she said.  "It takes a lot of courage."

Also present in court was Jeffrey Deskovic, an advocate against wrongful convictions.  He had himself been imprisoned for 16 for a murder he didn't commit.  He said that the entire situation in Brooklyn Supreme Court Monday was evidence of a flawed legal system.

"It's an example of a witness getting a benefit in exchange for testimony," Deskovic said, criticizing the practice. "Incentivized witnessing has been the cause of wrongful conviction in 15 percent of DNA-proven wrongful convictions."

Meanwhile, prosecutors began on Monday, in questions they asked Avitto, to portray him as an untrustworthy, easily swayed witness who is not to be believed.

Ultimately, the case lies with Judge Danny Chun.  It is not being heard by a jury.  Judge Chun can choose to let Giuca go free, grant him a new trial or keep him in prison to serve out his sentence of 25 years to life.

Giuca was convicted of procuring the gun that his accused accomplice, Antonio Russo, used to shoot and kill Fisher.  Russo is also serving a sentence of 25 years to life for the murder.

Giuca's story has attracted widespread media attention, and multiple Hollywood and New York actors have expressed interest in being in a movie about the case.  A screenplay is being written, and some actors and a Sony Pictures project producer were in the courtroom gallery on Monday.

The hearing was continued until Thursday, and it's expected to take weeks before Judge Chun makes his decision.