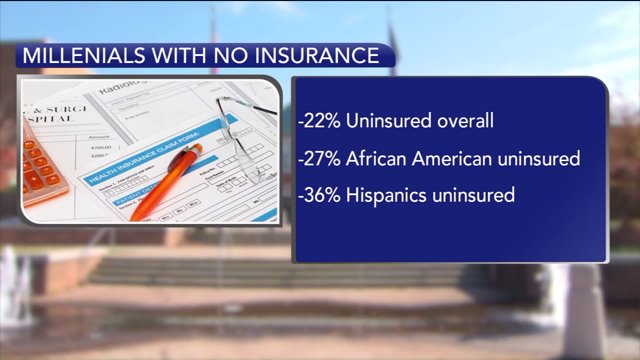 As a full time student at the College of Staten Island, Amanda Courtright, 21, deals with a significant amount of stress. She balances a demanding course load, commuting to and from school, and helping her mother with the household bills.

With the stress of all of her obligations, one very important thing fell by the wayside. "Health insurance," admitted Amanda.  "I didn’t have it for a long time, about two years I didn’t have it at all."

This is not a rare occurrence— many millennials and college students do not have healthcare as a result of them becoming too expensive to remain on their parents' insurance.  Roughly 22 percent of people aged 18-34, are completely without insurance.

The numbers amongst minority groups are even worse. 27 percent of African American millennials are uninsured, and 36 percent of Hispanics have no health insurance.  Surveys findings conclude a big part of the problem is that the vast majority of people simply don’t know there’s insurance from the government that can be 100 percent free.

She points out many individuals suffer from a misperception regarding Medicaid.

"It’s not just for the poor, it’s for the needy who need assistance with health insurance" said Monterrosa .

Anyone making roughly $16,000 a year or less qualifies for the completely free insurance.  Amanda learned about her chance to get covered when a Medicaid representative came to her campus, and she says it’s been a life-saver.

"It’s completely free, and very little copays for medicine. And goes until I'm 23 or 24," said Courtright. "I even told another friend of mine who was uninsured, and had gotten a hernia at work.  He thought he'd been on the hook for thousands in medical costs.  He signed up, and the insurance covered his operation!"

While Monterroso points out that her program greatly impacts young people, virtually everyone across all ages may benefit.