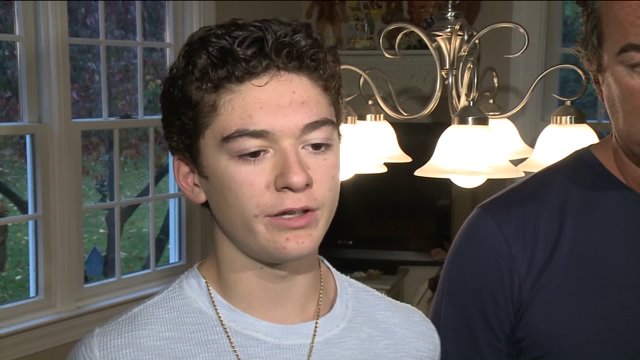 KINGS PARK, N.Y. — A high school sexting scandal has opened a debate as to how students should be punished.

Students from Kings Park High School were suspended this week after they received a sext with an explicit video. But some of those kids maintain they did not share it and should not be punished.

One of those teens was AJ Fenton. The 15-year-old was suspended but the sophomore showed up for school Tuesday. His father, Andrew Fenton, took him to school.

"The commanding officer came out to me and said 'Mr Fenton here's the deal. They want your son arrested for trespassing,'" he said.

The teen left so he was not arrested. Fenton said he received the text last week and got rid of it immediately.

"I viewed it. I didn't know what it was at first. I clicked on it, deleted it right away," Fenton said.

According to authorities, two 14-year-olds from Smithtown, Long Island sent out the video. In it, one of those teenagers and an underage girl engaged in a sexual act.

The teens were arrested and face felony charges.

According to Joseph Bavaro, a former special victims prosecutor, "If you show it to someone or if you send it to someone that's a crime under New York State."

"If you get something that's inappropriate and you delete it, what more can you do?" he said.

Superintendent Dr. Timothy Eagen of the Kings Park Central School District put out a statement late Tuesday afternoon. He said the district, "...has conducted and completed a thorough investigation surrounding the alleged sexting incident. The district believes that all student suspensions in relation to this alleged incident have been made in accordance with the district's code of conduct,"

Andrew Fenton disagreed with how the district handled this.

"All I want is an apology and my son's name cleared. He did nothing wrong. A text message message wound up on his phone as part of a group text," he said.

Suffolk Police said the Smithtown teenagers did not film the video on school property. The teenagers are scheduled to appear in family court at a later date.

According to police, if the video is sent around again, whoever does it could be prosecuted as well.