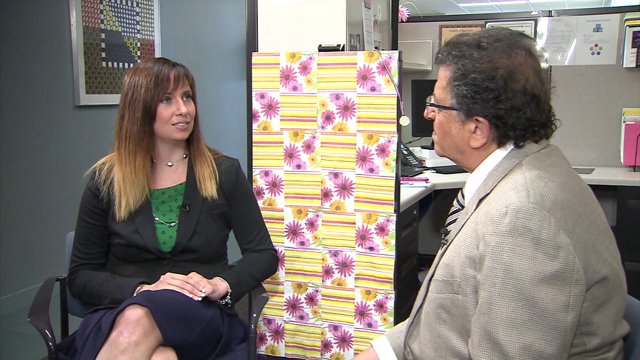 In this week`s "It`s a `G` Thing", ahead of Veteran`s Day, PIX11`s Mr. G shows us how two organizations helped retired Marine Corps Staff Sergeant, Kristin Zamichieli, return to civilian life and get a job.

It was a Wednesday, six years ago, that Kristin Zamichieli will remember forever.

She was send to Afghanistan as a member of the U.S. Marine Corps.

“The reason I chose the Marine Corps was because they were the hardest, and everyone told me I couldn’t do it,” Zamichieli smirked.

That attitude helped her quickly rise through the ranks becoming one of the first females ever promoted to Staff Sergeant in her field.

“I operated drones,” she explained. “We basically put a laser on the target and another plane comes and drops a bomb.”

It took Kristin quite some time to adjust. For five years she never fully felt safe, had significant sleeping problems and was sometimes mistreated because of her gender.

“When I came home from Afghanistan, I had never been more happy to be on American soil," she remembered. "I had really missed all the comforts of home.”

Coming back though also meant finding a job.

But with the help of Hiring our Heroes she realized her value and got a job at Prudential Financial.

“I worked pretty closely with a career coach who actually helped me figure out that I had done a lot of the things that employers were looking for and I had leadership and project management skills,” she explained.

“I think they are really looking at the issue of military vets transitioning holistically,” Zamichieli said.

But they can't and don't do it alone.

One local company has tailored its business to get involved.

“This is actually a camouflage I designed," he said as he showed me multiple fabric color patterns. "And what we do with this is we put in back of the ties.”

And while it may seam (yes a play on words!) like it's just for looks, there's more.

“We give back to veterans with every tie purchase," Fin explained. "Five dollars from every purchase goes directly to hiring efforts through an organization called Hiring Our Heroes.”

David Fin, of David Fin Ties, says this is a mission very close to him.

“When I was building the brand, a buddy of mine just came back from Afghanistan," he remembered. "He starting talking to me about the issues veterans are having facing jobs when they come back and when I started to look into it more, I realized it's really about that transition.”

All of David Fin's ties are handmade, from start to finish, and sold directly to the consumer. An attention to detail and a personal touch, inspired by veterans.

“Just growing up patriotic and understanding how important it is to help our neighbor in our backyard,” he said.

And as we gear up for Veteran's Day, Kristin wants to leave people with her perspective.

“It is an important time of the year, but guess I’m sensitive to Veteran issues all year round," she said. "I’m always grateful and in my mind, every day is Veteran’s Day.”