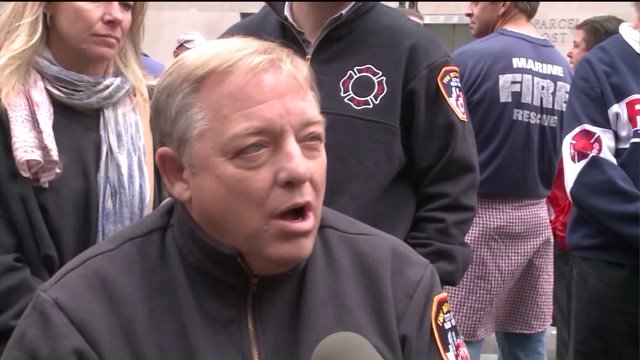 For Ray Pfeifer, the repercussions from his days as a NYC firefighter responding in the aftermath of 9/11 are severe. From the World Trade Center cough to now stage four renal cancer that has spread to his bones has left him in a wheelchair. Pfeifer was forced to retire last year and today one of many begging members of Congress to do the right thing and pass, once again, the James Zadroga Health and Compensation Act.

"It looked like it was sailing to pass it and then the day they swore in the new speaker, Speaker Ryan, another bill was introduced. A bill that would gut and kill the program," explained Congresswoman Maloney.

The Zadroga Bill has bi-partisan support, but was allowed to recently expire.

Now the House Judiciary and the Energy and Commerce Committee, with its Republican leadership released two separate bills that not only slashes funding by 60%, but also limits the bill and extends it for only 5 years.

Maloney, with Nadler and other members of Congress stood with first responders to plead with Washington colleagues not to play politics with this one and urged them to keep the bill's existing funding and to make it permanent.

"Congress told us in 5 years come back to us and we'll take care of it. Well they haven't and now we have to go down there and beg again," said Pfeifer.

The bill expired at the end of September 2015 and according to Maloney has only enough funding to sustain itself without action until the September 2016.

For a full list of the bills supporters and those who oppose it visit the Citizens for the Extension of the Jame Zadroga Act website.