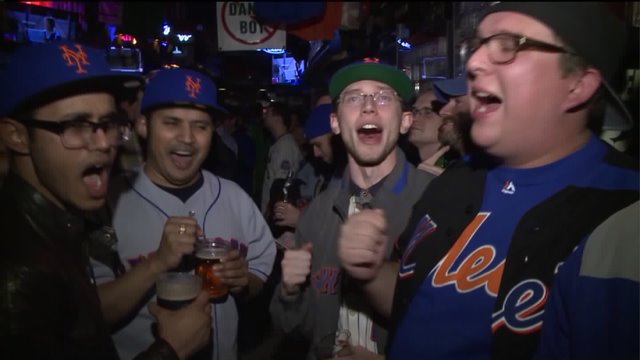 NEW YORK -- The Mets put the game away behind Noah Syndergaard, cutting their World Series deficit to 2-1.

Syndergaard went six innings and at one point retired 12 Royals in a row. He earned the victory.

The Amazins' made sure the game wasn't close in the end. Four runs in the 6th highlighted by a two RBI single by Wright put the Mets up 9-3.

Game 3 started off with a bang for the Mets. Down a run, David Wright launched a two run homer to put the Mets up 2-1. His first homer of the playoffs.

The Royals struck back in the second off Noah Syndergaard. Four hits led to two runs and a 3-2 KC lead.

The Mets then got a lift from another veteran. Curtis Granderson smacked a two run shot of his own in the third to put the Mets up 4-3—it was his 2nd homer of the series.

The mets scored their fifth run an inning later when Micheal Conforto beat out a ground ball, allowing Lucas Duda to score.

The Mets will try to even things in Game 4 on Halloween night, when hometown rookie Steven Matz starts against Chris Young, who won the opener in relief.