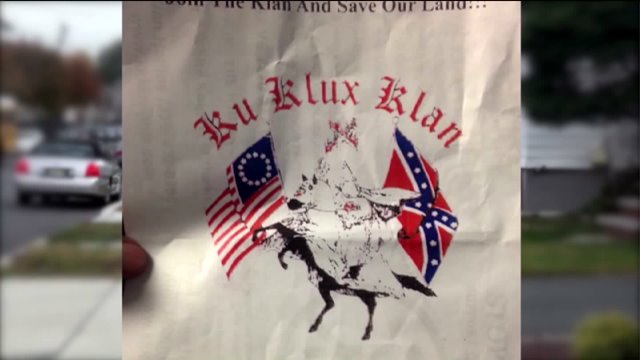 LYNDHURST, N.J. — Fliers urging residents to join the Ku Klux Klan are turning up on doorsteps and driveways in a northern New Jersey town.

The leaflets call on Lyndhurst residents to "Join the Klan and Save Our Land" and reportedly bash gay men, blacks and hispanics. One page slams Jeb Bush for ‘browning’ America, claiming that he would open our borders.

“It’s definitely disturbing cause your in time where racism is a big topic and seeing something like this is just scary,” said Aziz Ngoan, a Lyndhurst resident.

The police chief called the fliers ‘trash’ and an ill attempt at recruitment.

“It’s upsetting, that number one, it was done in Lyndhurst. But it’s more upsetting that this organization even exists,” said Chief James O’Connor.

While New Jersey NAACP leaders describe the KKK as domestic terrorists and cowards.

“These things don’t effect a certain race, but effects everyone,” said Bergen County’s NAACP President, Anthony Cureton, “And I think we have to find a way to come together and put this to the side.”

Police don’t think the residents who received the fliers were targeted. A few months ago, similar propaganda was found on driveways in neighboring Rutherford.

Police say the fliers will be treated as litter and the person behind them will be fined, if caught.

The fliers include a website and phone number for the Pelham, North Carolina-based Loyal White Knights of the KKK.

WARNING: The fliers in the gallery above contain hateful, racist messages that may be offensive or disturbing to some readers. Viewer discretion advised.

North Carolina Loyal White Knights grand dragon Robert Jones tells The Record newspaper his group has members in Lyndhurst who recently held a meeting and decided to distribute materials in the township.

This is the latest in a string of KKK advertisements found in New York and New Jersey over the past several years.

Police said the packages include "racist messages" referring to the shooting death of Michael Brown in Ferguson by a police officer the previous month.