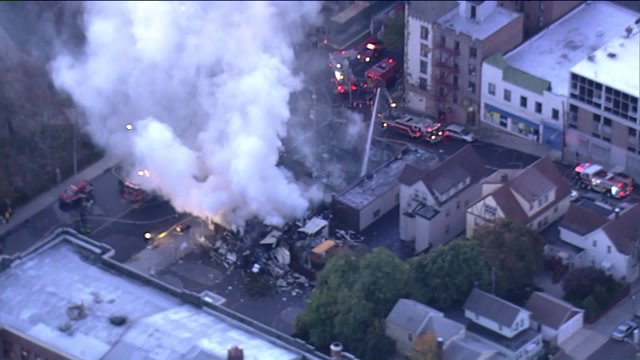 MOUNT VERNON, N.Y. — A fire ripping through a strip mall in Mount Vernon has produced so much smoke, a nearby school has been closed for the day while firefighters continue to battle the blaze.

The fire started about 1 a.m. Monday at 226 Gramatan Ave., according to the Mount Vernon Fire Department.

Residents living above the businesses evacuated themselves before the structure collapsed, officials said.

The scene of a three-alarm blaze on Gramatan Avenue in Mount Vernon on Monday, Oct. 19, 2015. (Photo: Craig Treadway, PIX11 News)

Nelson Mandela High School has been closed for the day due to smoke from the fire nearby.

A cause of the blaze is under investigation. There have been no reported injuries, officials said.