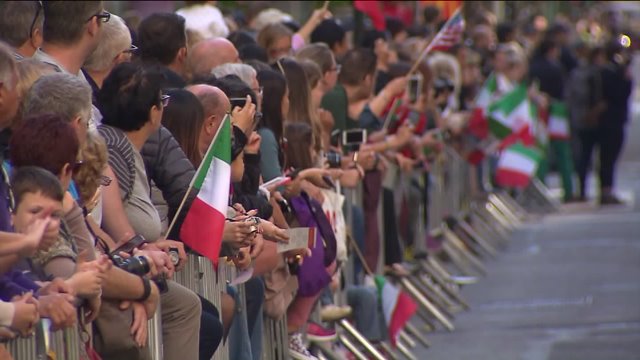 MIDTOWN, Manhattan — It's a federal holiday celebrated by more people in New York City — up to a million — than in any other city in the world. However, on Monday, a few thousand people in another part of the city very openly stated that Columbus Day should be spent in ways other than promoting the first European explorer of his era to reach North America.

Instead, they celebrated Indigenous Peoples Day, as part of a larger and growing movement that's causing some controversy, but is also gaining some support on some surprising circles.

The million event goers were lined up along Fifth Avenue from midtown to the Upper East Side.  The scene was a noteworthy contrast to where people were in attendance by the thousands, for a very different event. The Indigenous Peoples Day Celebration on Randall's Island was the first Native American pow wow in Manhattan since Europeans first settled here 400 years ago. Randall's Island, even though it's separated from Manhattan by the Harlem River, is officially part of the borough.

The Native American cultural event, which lasted throughout the three-day weekend, definitely did not promote the man whose name is most closely associated with this day.

"Through his own writing, through his own words," Indigenous Peoples Day organizer Cliff Matias said about Christopher Columbus, "rape, pillage, murder, genocide."

It is true that Columbus' journals show that he enslaved native people, sometimes under very brutal conditions. His writings even indicate that he condoned human sex trafficking, some of it involving children.

However, back at the parade, the Italian flags, the banners written in Italian and the statements of elected officials showed that the event was about Italian-American pride, despite it being named after the Italian explorer.

"Today, everybody's Italian!" Senator Charles Schumer shouted through an electric megaphone.  "And today my name's not Schumer, it's Shuma!"

When asked to comment on the Indigenous Peoples Day celebration, the senator told PIX11 News, "Look, everyone's entitled to believe what they want, but I'm not going to denigrate Italian Americans."  Then he went on, in the perfect weather, waving his Italian flag down the parade route.

But organizers of Indigenous Peoples Day say they're not anti-Italian-American at all.  They said they're anti-Christopher Columbus.

"Knowing the atrocities he himself stated he did," said Roberto Mukaro Borrero, an event organizer, "Why would we celebrate this day?"

He said he strongly favored more an Italian-American heritage celebration.  "They have better role models than Columbus," he said.

But must the two events be opposed?  The answer came from event goers themselves.

"We support them," said Bill Kapowski, who was at the parade with his wife, Lisa Delmonico. They said that they are proud to show their Italian heritage, but also acknowledged that other Americans need to embrace theirs as well.  That includes "our Native American brothers and sisters," Kapowski said.