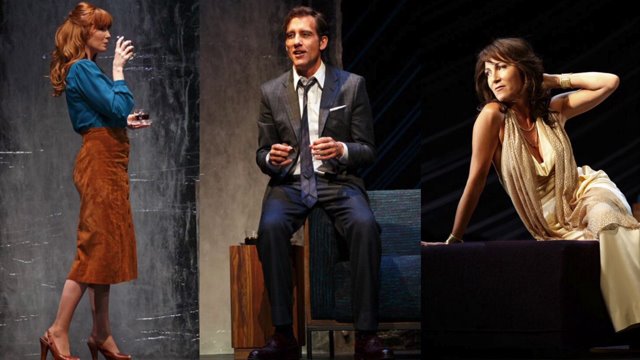 In this week`s Backstage on Broadway, PIX11 talks with the stars of `Old TImes; as Clive Owen and Kelly Reilly make their debuts alongside Eve Best,

“Feels like an honor to be here,” Kelly Reilly exclaimed.

The emotions of an opening night take center stage after the curtain call Old Times.

The one-act play stars Clive Owen and Kelly Reilly, who are both making their Broadway debuts.

“It was something I had always wanted to do, I had kind of forgotten really it was a bit of a dream of mine, to come to Broadway and do a play," Clive Owen explained. "Then when this came about, it reminded me and I said yeah."

“To be a London stage actor, in New York, it really is something that’s very special," Kelly Reilly said. "[It's] a dream that I have always had.”

You may recognize him from the hit TV show "The Knick" or for his roles in "Children of Men" or "Inside Man."

She was most recently seen alongside Vince Vaughn in the HBO series "True Detective."

“Thank God for the other two, because they are wonderful performers,” Eve Best said of Owen and Reilly.

“It does feel a little bit different, it’s very enigmatic," Best said. "So, every night there's going to be a different nuance, a different flavor, [and] of course the audience is always very different.”

Old Times, written by Nobel Prize winner, Harold Pinter, is a seductive, mysterious story between a husband, wife and her old friend.

“All of Pinter is about timing,” Owen described. “You read the play and it’s so disciplined, it’s so well put together, and the rhythms are everything.”

“It is like a ballet and the more we do it, it’s that tightrope of being very free with it but also it’s sort of this enormous piece of engineering," Reilly said.

A dance these three say has become quite seamless after spending so much time together.

“We’ve [practically] been living with each other for two months," Reilly said. "It’s like your sort of senses start to feel one another.”

“We’re all sort of in this same crazy boat together," Best smiled. “It’s quite a scary trip and it’s good.”

The show is playing a limited run at the American Airlines Theatre through November 29th.