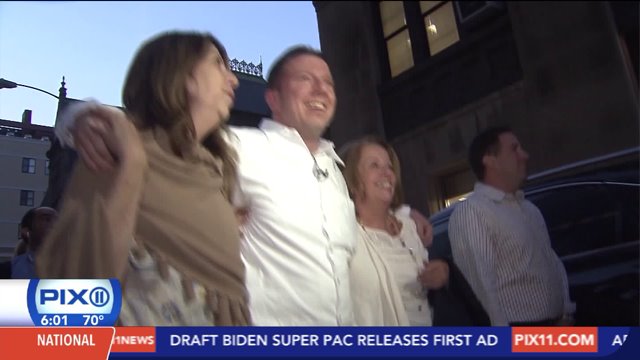 John Hincapie spent a quarter century behind bars for a high-profile murder that all evidence indicates he did not commit. So how, then, did he end up being convicted and serving time for the crime?

The answer, according to advocates for the wrongfully convicted, is an illegal practice that happens all too often, and can be prevented.

Tuesday evening, Hincapie, 42, walked out of custody a free man. It came after a judge ruled that the evidence was so strong that Hincapie had a confession beaten out of him, and that the then-17 year-old was not on the subway platform where Utah tourist Brian Watkins was killed, the case against him had to be overturned.

"Shame on those individuals who did this to me," Hincapie said minutes after his release at around 6:40 Tuesday evening, "But, I forgive them," he added.

Emotions ranging from joy to anger and grace marked Hincapie's release, but they underscore what many advocates for the wrongly accused call is a larger problem.

"They physically beat a confession out of him," said Jeffrey Deskovic, founder of the foundation that bears his name and which advocates for the release of wrongfully convicted prisoners.

"I was wrongfully convicted," he said.

He was convicted in 1990 of the rape and murder of his fellow high school student Angela Correa. The real killer, Steven Cunningham, confessed 17 years later, after DNA evidence pointed to him. Meanwhile, in the years between Correa's murder and Cunningham's confession, he brutally killed someone else — schoolteacher and mother of three, Patricia Morrison.

A jury last year awarded Deskovic $41.6 million because of the confession he was coerced into making and false evidence presented against him in his 1990 trial. He told PIX11 News that cases like his — and Hincapie's — could be avoided, simply.

"Because my interrogation was not taped," Deskovic said. "The conviction was uncorroborated on anything."

Currently, state law does not require video-recorded police interviews, and there is no formal plan for them to happen.

Select NYPD officers do wear body cameras, however, in a pilot program that has expanded I've the last year.

Deskovic and other advocates said that the idea of video-recorded interviews and interrogations is to ensure justice is served actively, not, in the words of one of the pro bono investigators who dug up evidence to help secure Hincapie's release, partially.

"But the real criminals," Hughes said, "the crooked cops and prosecutors, walked. [Hincapie] might get a civil settlement, but that won't give him back his life."