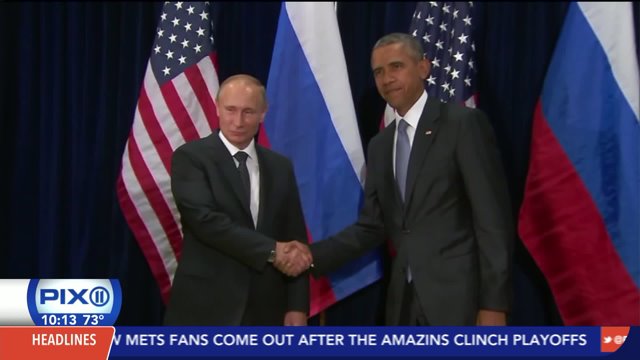 President Obama and Russian President Vladimir Putin have been circling each other - or at the very least talking around each other, for days now leading up their dueling speeches at this year’s United Nations General Assembly.

Today both leaders took to the world stage - albeit separately, and then shook hand, as they continued their debate over the matter of eradicating ISIS in Syria, and the fate of Syrian president Bashar al-Assad.

This sophisticated foreign policy discussion is unfolding on several fronts.

But it all boils down to this:

The United States still wants to dislodge ISIS from power in Syria, but disapproves of Russia’s handling of matters in Ukraine, and just as importantly - its support of the Assad regime in Syria, where that government is accused of bombing and terrorizing its own citizens.

President Putin says its supporting Assad is in the interest of maintaining stability in the region - globally.

NYU Professor of Advanced Russian Studies Yanni Kotsonis *says* ultimately, all of the pubic back and forth…

Including President Putin’s Sunday night interview on 60 Minutes, will be followed - and ultimately resolved, by high level, back door diplomacy.

“After we’ve had our speeches at home, and after we’ve had newspapers reporting about it, diplomats will quietly sit down and see if they can work something out together. Very unlikely alliances. Unholy alliances in some ways. I mean, what do you think the Iranians feel about getting into bed with the united states? It’s terrible for them to. But what if we could all sit down and focus on our shared problem,” said professor Kotsonis.

So why does this debate matter to you at home?

Because in neighborhood across our region - including Brighton Beach Brooklyn, residents are dissecting both leaders’ every word - with an eye on their loved one’s in their native Russia.

After their public speeches at the un, presidents Obama and Putin met privately for about ninety minutes in an attempt to work out their differences. When they emerged, there was reportedly no change of heart, but perhaps a clearer understanding of just how much work is ahead.