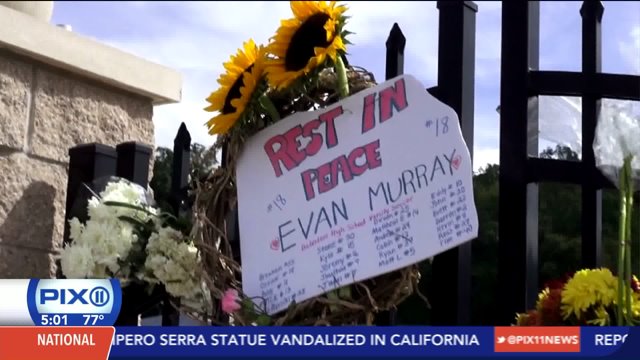 WASHINGTON, N.J. — Autopsy results show that 17-year-old Evan Murray from massive internal bleeding due to a tear in his spleen - which was swollen and therefore more sensitive to injury. Witnesses say Murray was hit during Friday night’s game, that he walked off the field and collapsed soon after.

“I don’t know how they gonna take that news,” said Sarah Mendez, whose son was Murray’s friend, “cause I know he is the only child.”

Parents mourned outside the school football stadium on Monday, students held hands. A collection of flowers and mementos has grown outside the stadium. While local businesses have posted signs in memory of the fallen player.

Evan Murray was a star on the Warren Hills High School football team, starting on varsity since his sophomore year. He was also a stand out baseball and basketball player, and excelled in the classroom.

“He definitely didn’t deserve it at all,” said classmate Dan Serrano, “The kid was so nice. And he was so intelligent. Like, for him to be a triathlete and an honor student too. That’s one of a kind.”

Witnesses say that as Murray was carried away on a stretcher Friday night, he gave a thumbs up to the crowd.

Warren Hills’ Superintendent responded to questions on whether the teen’s sudden death would prompt any reconsideration of the school’s football program.

“Certainly it’s something we always reassess as we go,” said Dr. Gary Bowen, “In my opinion, we have solid standards of state and national leadership in these matters, in terms of constantly reassessing our programs. So I’m comfortable that we were inside the appropriate area of safety.”

Parents said they’re also confident in the level of safety on the field.

“Nothing is ever cut because they’re trying to save money. If anything everybody wants to do more to protect the kids,” said Diane Hensle-Gil, the mother of a freshman athlete at the high school.

The school has been offering counseling to the kids. Funeral services are planned for later this week.