Mayor unveils a big boost to help prevent people from being evicted, but critics say it’s not enough 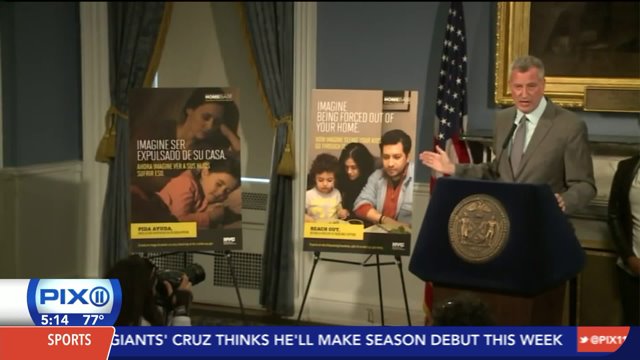 PROSPECT-LEFFERTS GARDENS, Brooklyn — In a city that has seen homelessness rise steadily over the last decade, the mayor of New York on Monday announced a new initiative aimed at boosting legal help for residents at risk of losing their homes.  It's a major increase in funding, but some homeless people and advocates for the homeless are saying it's not enough.

"If you ask me, it's set up to fail," said Jordan Cancel about his situation.  He's one of dozens of people staying in a long-term homeless shelter at 60 Clarkson Avenue in Prospect-Lefferts Gardens, a fast-gentrifying part of Brooklyn.

He and other tenants in the building keep having letters slid under their doors that are usually from landlord Barry Hers's company, or claim to be from the city's homeless services department.  The letters tell them that they have to relocate from their current temporary homes, which are funded by the city at a rate of approximately $2,700 for a two bedroom shelter apartment, to other homeless facilities.  But those letters may be forgeries by landlord Barry Hers, and those other facilities are often not prepared to take in additional people.

It's in pursuit of landlords like Hers that Mayor Bill de Blasio on Monday announced a new initiative that will increase funding for lawyers to help people at risk of being on the street.  The city currently spends about $34 million per year on legal assistance for residents at risk of being homeless. Under Mayor de Blasio's initiative, that amount will increase to $60 million by 2017, ten times what it was a decade before.

"If we had an actual legal team," said long-term shelter resident Cancel about his fellow residents' ongoing status of not knowing how long they can stay in their building, "this might be easier for us and everybody else."

"We will help people every step of the way," said Mayor de Blasio at a mid-afternoon news conference.  "Whether they're at risk of" losing their homes, he said, or "heaven forbid," they're already homeless.

His new initiative is largely targeted at working residents who rent apartments who are at risk of being evicted by unscrupulous landlords.

With the city's homeless population having increased under Mayor de Blasio from 50,000 in January 2014 to 57,000 now, the mayor's new plan is designed to stop the increase, and reverse the pattern.

Still, some advocates for the homeless say more help is needed.

"The increased resources for legal services is vital," said Jennifer Flynn, executive director of Voices of Community Activists and Leaders, or VOCAL New York.  "But it won't work without more housing."

"Today's announcement is great," she added, "but we need that other piece, or it'll all fall apart."

She said that the mayor not only has to stand firm on his pledge to build 200,000 units of affordable housing for New Yorkers, but that he also needs to ensure that 10 percent of that construction is dedicated to housing the poorest residents -- families earning less than $30,000 a year.

She pointed out that that will require more work between the city and Albany.  Mayor de Blasio told PIX11 News that that's correct, and admitted in his news conference, "the response we've got from the state is not enough."

"We can't do more without the state's help," he continued, "and we're going to do all we can to get that."

However, despite the fact that the mayor's relationship with Governor Andrew Cuomo appears to be thawing, it's still by no means a friendly one.  Whether or not Mayor de Blasio can secure the state funding needed to build more affordable housing remains an open question.

In the meantime, people facing eviction from the affordable housing they currently have at least have the prospect of having better legal representation to keep them there.