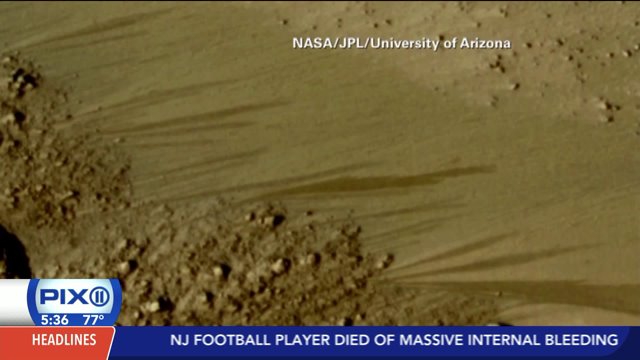 NASA scientists said Monday they believe they have confirmed that water intermittently flows on the surface of Mars, a discovery that may have ramifications in the search for past or present life on the planet.

The agency called a news conference to discuss what it called a major science finding based on analysis of imagery from the Mars Reconnaissance Rover which confirmed that salty water flowing down Martian slopes is responsible for seasonal dark streaks seen in spots on the planet's surface.

It's not the first discovery of water on Mars.

Researchers have known for many years that Mars has water frozen at its poles, in its thin atmosphere, and, most recently, in tiny puddles that appear to form at night on the surface.

But the discovery of flowing water on cold, seemingly barren Mars could herald a breakthrough in the search for life there -- past or present.

Monday's announcement appears linked to the release of a new paper in which NASA researchers say analysis of imaging from the Mars Reconnaissance Orbiter shows that seasonal dark streaks on the Martian surface -- formally called recurring slope lineae -- are the result of briny water periodically flowing across the planet's surface.

The salt content of the water is important because without it, the water would freeze in Mars' often bone-chilling temperatures.

Three of the paper's co-authors are participants in Monday's announcement, including lead author Lujendra Ojha, who first stumbled across the streaks in 2011 while studying at the University of Arizona. Ojha and his colleagues theorized at the time that flowing water was the cause of the streaks.

The paper doesn't offer an explanation about where the water could be coming from, but suggests several possibilities: It could be melting subsurface ice; it might result from salts widely believed to be in the Martian soil, pulling water out of the thin Martian atmosphere; or possibly liquid is bubbling up from an aquifer, the researchers say.

In April, McEwen announced research showing that salts in the Martian soil have the ability to grab enough water out of the air to form tiny puddles at night. And in March, NASA said Mars may once have had a sea similar to the Atlantic Ocean on Earth. About 87% of that water has been lost to space, researchers said.