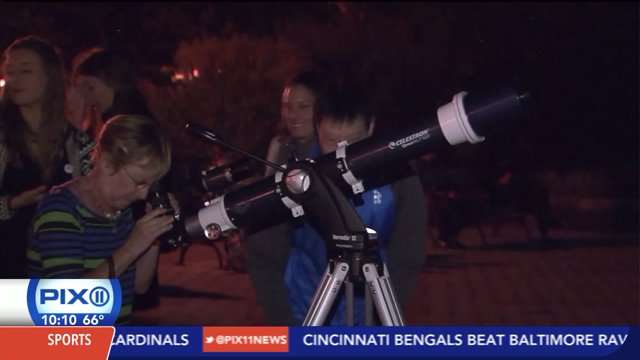 NEW YORK — Sounds like something out of a vampire movie, but the "Super Blood Moon" involved probably one of the coolest space shows that happens on an extremely rare occasion.

Even in a light polluted place like NYC, you can still get a great view.

We've seen supermoons before, but this one is different because it occurred during a lunar eclipse. Earth passed between the sun and the moon, making it appear orange — hence the so-called blood moon name.

This rare appearance was a perfect excuse for die-hard stargazers all over the world to stay up past their bedtime.

Members of the city's "Amateur Astronomers Association" organized viewing parties all over Manhattan to see the eclipse, sharing some high powered gear, even though the eclipse can be seen with the naked eye (when the weather cooperates.)

The total eclipse began at 10:11 p.m. and lasted about an hour and 12 minutes. Astronomers said the next supermoon lunar eclipse will occur in 2033.

People in Long Island had some of the best views of the spectacular event. Others experienced some cloud coverage, but NASA had a livestream of the moon so no one missed it.

PIX11 viewers sent pictures of their view of the supermoon lunar eclipse on Facebook.