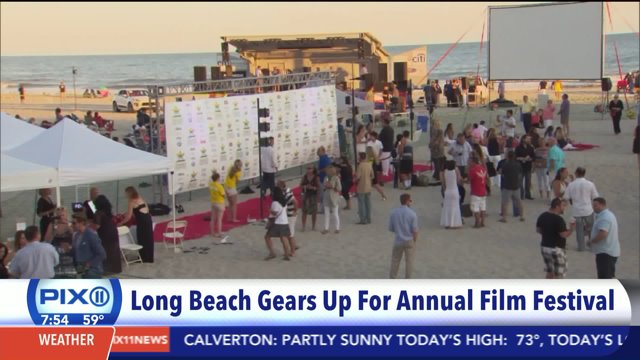 The annual Long Beach International Film Festival kicks off this week from September 24-27.

Now, in it's fourth year, the local phenomenon is attracting filmmakers and attendees from across the globe.

There are hundreds of film festivals in the city.

But you wouldn't necessary think Nassau County or even Long Beach as one of the top places to go for a taste of cinematic magic.

The Long Beach International Film Festival is changing that.

It's the glitz and glamour you'd expect at a film festival, but without all the red tape.

"We're really trying to create a culture," Craig Weintraub, co-founder of the LBIFF, said. "Create an awareness of what a film festival is."

Long Beach International Film Festival is giving movie goers the ultimate experience– featuring 80 studio and independent films. Everything will be showcased in theaters in Long Beach and Rockville Centre.

"You don't have to go into Manhattan to get the film festival feel," Weintraub said. "When I first walked in here, I felt like this was the Ziefeld Theater of Long Island."

It may not have the history yet but the festival is growing exponentially.

Compared to where it started– co-founders Craig Weintraub and Ingrid Dodd couldn't be more proud.

"It started right here," Dodd said. "Right in the back where we are now. We had our first screening with I think 13 short films, we had maybe 30 submissions."

One of the most highlighted films this year is "Lamotta: The Bronx Bull," which features stars Williams Forstyhe and Tom Sizemore.

But it's the up-coming talent that makes this festival so noteworthy.

Like this animated short film called "Bear Story," or this comedy about the last taxi driver in a world filled of zombies, appropriately named "The Last Taxi Driver."

There are also documentaries, such as "Comic Book Heaven," the story about a comic book store in Sunnyside, Queens.

Daniel Baldwin, known for his role as Detective Beau Felton on NBC's Homicide: Life on the Street, is one of the festival's biggest supporters.

"We're going to make this film festival the biggest on Long Island," Baldwin said. "This is really a community that's trying to do something special for young filmmakers, and for old guys like me.

A combination "before the rage" and "after the rage" of world middleweight boxing champion Jake LaMotta's tumultuous life and times.

A moving story within a story.

81 year old Joe Leisner cantankerously assesses the status of his business, the comic book industry, and his future.

A taxi driver refuses to give up his license even when most of the city’s inhabitants are zombies.