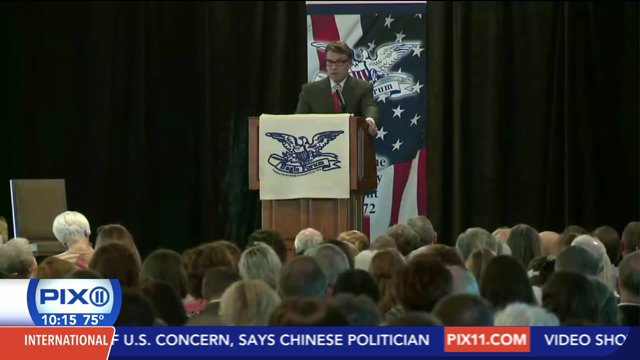 WASHINGTON -- Rick Perry, the former Texas governor who insisted he learned lessons from his disastrous 2012 presidential campaign, dropped his second bid for the White House on Friday after just 100 days.

"Today, I am suspending my campaign for the presidency of the United States," Perry said in an address in St. Louis that virtually mirrored his standard stump speech until the very end. "Life is good. I am a blessed man."

The departure of Perry, who had little support in early-voting states or among the GOP donor class, is unlikely to alter the contours of the Republican race. But Perry nevertheless implored his supporters in an email to back a candidate who embodies the principles of conservatism.

"The conservative movement has always been about principles, not personalities," Perry said, before making a not-too-veiled swipe at Donald Trump, the GOP's current front-runner. "Our nominee should embody those principles. He -- or she -- must make the case for the cause of conservatism more than the cause of their own celebrity."

For almost two years, the swaggering Texan had prepared and studied for a second shot at the presidency. But in a 17-candidate field, Perry found himself weakened by fundraisers who ditched him for his rivals and by top surrogates who defected as his campaign crumbled. He raised only about $1 million in the first fundraising quarter, and he never had enough supporters for him to earn a spot in the premier GOP debates. Back in Texas, he remained under indictment on an abuse-of-power charge.

And as it became increasingly clear that the campaign wouldn't be able to overcome deep financial problems that left him without enough money to win a competitive race, he became the first GOP candidate to leave it.

Still, Perry's exit still comes surprisingly early. He was scheduled to appear next week at CNN's Republican debate, which his allies hoped would be a turning point for his troubled campaign. His super PAC sat on more than $17 million that it was investing in Iowa to fill the void created by his Austin-based campaign as its financial difficulties mounted. And Perry acted very much the candidate all day on Friday, authoring an opinion piece about terrorism in National Review in the morning and sharing his vision for his presidency for a half hour in his St. Louis speech in the afternoon.

Some of his top supporters expressed shock that Perry bowed out so early. David Johnson, an Iowa state senator and the candidate's top backer in the Hawkeye State, said Perry may have prematurely pulled the plug.

"Perhaps Governor Perry sees something that I don't," Johnson said, explaining that he heard about Perry's decision from the other Texan in the race -- Ted Cruz. "I was certainly ready to go."

Perry was unable to reassemble the Texas political and financial base that made him, at one point, the party's front-runner in the last presidential cycle. In the 2012 race, his campaign was dogged by questions about his readiness, punctuated by an embarrassing moment in a debate when he couldn't name the third agency he planned to eliminate as president.

And just as in his first campaign, the man who was once governor of the largest Republican state for 14 years, leaves the campaign trail disappointed and also politically damaged.

The second campaign began to unravel this summer, with the operation essentially abandoning its efforts in Iowa and New Hampshire. Doug Deason, the son of a $5 million donor to the Perry super PAC, said Perry's campaign had only raised $100,000 in the two months since the last reporting period. Deason said Perry delivered the news of the suspension to him on Thursday.

"He felt it coming. He knew there's only so much the super PAC can do," explained Deason, a powerful Texas donor who is part of the Koch Brothers' political network. "After the word got out they were struggling, they did start getting donations in -- but it just wasn't enough to really make a difference."

Deason expects to get his millions of dollars returned next week.

"The beauty, of course, of investing in a super PAC is you get the money back that doesn't get spent," Deason said.

But Austin Barbour, the group's top operative, said it was not immediately clear if the law allowed the donations to be refunded.

Nevertheless, other campaigns Friday evening were moving rapidly to poach top financial and political backers of Perry. Deason dined with Cruz a few evenings ago. Even while Friday's speech was going on, Deason was contacted by Cruz finance director Willie Langston and lieutenants from the Jeb Bush and Scott Walker campaigns. Johnson said in the hours after Perry's decision, he heard from aides representing Walker, Cruz and Rick Santorum.

"Would you consider another Texan for president?" asked Bryan English, Cruz's Iowa state director, according to Johnson.

The departure of Perry speaks in part to the limitations of super PACs, which had been expected to save the cash-strapped campaign. Perry's well-funded group, Opportunity and Freedom PAC, depended heavily on a small group of Texas families, and the organization had indicated it was willing to hire field operatives and launch an aggressive advertising campaign.

"In It For The Long Haul: Opportunity and Freedom PAC Is Back On The Air In Iowa," the group announced at 9 a.m. on Friday.

"We all felt like we had really turned a corner in the past few days," said a disappointed Barbour, whose super PAC had knocked on 10,000 doors in Iowa so far. "We wanted to fight. We felt like there was path, but again, it's not up to us."

But despite the super PAC's intentions, it cannot pay filing fees in early states or help the candidate raise the hard money needed to travel or operate a headquarters. The campaign had only raised $1.2 million in the first three months of the campaign, Deason said.

Earlier this week, Perry shuttered his South Carolina campaign headquarters in the capital city of Columbia. And field staffers in Iowa and New Hampshire went without pay this month as the campaign tried to salvage its operation. About a month ago, Perry's campaign announced that it would no longer be paying staff across the country.

Some Perry staffers had remained loyal to the campaign, and his super PAC was expected to play a growing, if not unprecedented, role in resuscitating the official campaign. Perry's support barely registered in polls, but his departure will likely create an intense fight for the dollars that have flooded his big-money group, which must spend the money independently.

It is unclear which candidate, or candidates, will inherit the support of Perry's backers. In the past, Perry has repeatedly gone out of his way to lavish praise on another candidate with Texas roots: businesswoman Carly Fiorina.

Soon after Perry announced the end of his bid, a flood of warm wishes came from his now-former GOP presidential rivals on Twitter -- perhaps in an effort to court his support, or that of his backers.

".@GovernorPerry is a terrific guy and I wish him well- I know he will have a great future!" tweeted Trump, who has made antagonizing his GOP rivals, including Perry, a hallmark of his campaign.

Cruz said he donated to The Lone Survivor Foundation and the Chris Kyle Frog Foundation, two of Perry's favorite charities, and praised his one-time boss.

"The entire GOP field was unquestionably made stronger by the experience & wisdom @GovernorPerry brought to the race," he tweeted.

Bush praised Perry for his commitment to conservatism.

"Amen. God bless Rick Perry for his continuing commitment to that cause," Bush said.

"@GovernorPerry getting to know you and Anita has been a great joy for our family. Thank you for your service friend," Santorum tweeted.

Other candidates, like Louisiana Gov. Bobby Jindal and Kentucky Sen. Rand Paul, who have feuded with Trump, used Perry's departure to mock the GOP front-runner.

".@realDonaldTrump Attacked him one day. Praised him today. Sounding like a typical politician. Rick is a better man than you'll ever be," Jindal tweeted.

"What does it say about GOP when a 3 & half term Gov w/ a successful record of creating jobs bows out as a reality star leads in the polls?" Paul asked.