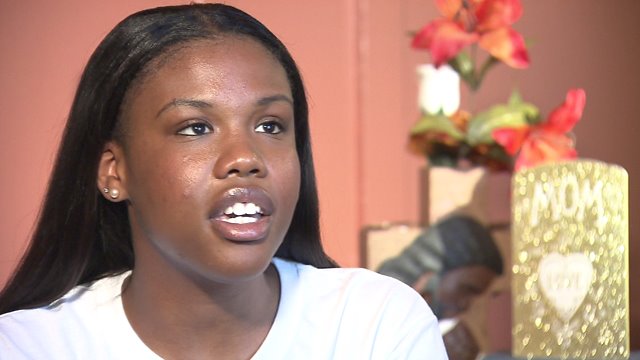 PIX11`s James Ford talks with the family of Marcy Borders, also known as the 9/11 Dust Lady, just days after she passed away from stomach cancer.

BAYONNE, N.J. — Noelle Borders remembers her mom by singing one of her favorite songs: "Let the weak say I am strong."

Marcy Borders and her daughter, Noelle.

"Me and my mom were best friends," she told PIX11 News. "She still is my best friend."

To her family, Marcy Borders was a fun-loving mother and sister. To the world, she was "The Dust Lady."

In one of the most recognizable images of the 9/11 attacks, Marcy Borders appears covered in dust and debris minutes after the first towers fell. She climbed down 81 flights of stairs to escape the North Tower.

"She said she saw papers falling out the window, then chairs, then people," Noelle, who was 8 years old at the time, recalled. "She was like, 'Oh no!' She left everything and ran because her main goal was me."

Marcy Borders survived that day, but she died in August of stomach cancer.

"I do think it was 9/11 related because before that she was fine," Noelle said.

Marcy Borders's sister Dawn and brother Michael along with her daughter, Noelle, had their idea of how to celebrate her life.

"We didn’t want to wear suits and ties," Michael said about the funeral. "We just wore our [R.I.P.] shirts."

"She was covered in dust, it was over her eyes," Dawn said. "Some man handed her a bottle of water, and asked if she was OK. It was the worst day of her life, she said."

Noelle Borders said "nobody knows the real story" about her mother that fateful day in 2001. The image of Marcy Borders covered in dust didn't show the long-term damage she suffered.

“Oh Lord, I just wish I could have peace of mind," Marcy Borders said in a 2002 interview with CNN.

Her brother said, ever since Sept. 11, Marcy "hated" New York.

"She never wanted to go back in there," she said.

Marcy's sister said that day shook her to the core -- and fundamentally altered her perspective.

"She didn't trust people after that," Dawn said.

And it turned into a cycle of addiction and pain.

"Depression, drug abuse and alcohol," Noelle said, describing what her mother went through. "But I really didn't see that. She never really let us see it."

"She turned to God. She went to church two times a day," Dawn said. "She left all of that in the past and focused on her daughter. [Then] when her son came, that was it."

Marcy Borders and her son, Zayden

Zayden was born 7 years ago. Marcy regularly attended Narcotics Anonymous and kept working on putting her life back together.

"My mom went away for treatment," Noelle remembered. "She came back and was ready for senior prom."

Dawn described her late sister as "the life of the party."

"She enjoyed life, church, music, people, especially her kids," Dawn said. "Life of the party, person that was outgoing, encouraging, focused and motivated."

Then a couple years later, she told her sister that she had pain in her stomach. It was cancer, possibly caused by her exposure to toxins on 9/11. But she managed to carry on for more than a year.

"My sister didn't live her life like she had cancer," Michael said.

The well-known native of Bayonne, N.J., was even in a campaign commercial for a city council candidate.

"I feel like she decided when she wanted to go, cancer didn't decide when it wanted to take her," Michael said.

"It's hard to cry," Michael said. "How can you cry when someone lived their life as wonderful as she did."

"I’m going to remember my sister as Marcy Borders, not 'The Dust Lady,' but Marcy," Dawn said.

Tributes from across the world and online show how widely known Marcy became as the so-called Dust Lady in that image. She will always be an iconic face of 9/11.

"It makes me feel good because her story lives on," Noelle said, smiling. "Her story continues through me. She always said, 'Where the dust lady stops, is where her daughter starts.'"

For her part, Noelle is succeeding with her mother in mind: she has earned her Bachelor's degrees in Communications and Elementary Education and is currently working on her Master's degree.