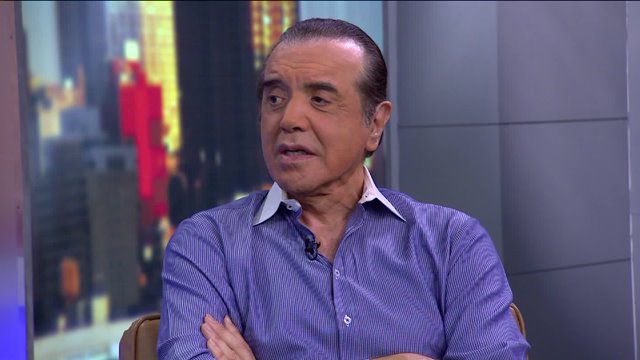 NEW YORK-- Bronx native and Oscar-nominated actor Chazz Palminteri loves his Yankees, but had nice words for their cross-town rivals.

"Mets are a great club now," Palminteri said on PIX11. "[Yoenis Cespedes] is playing unworldly, insane. It almost like you can't pitch to him."

The long-time Bronx Bombers fan is looking ahead to the critical Toronto Blue Jays series, which hold a game and a half lead over the Yanks in the AL East standings.

He also didn't hold back praise for disgraced slugger Alex Rodriguez, who has 30 homeruns and is having a commendable season after a season-long suspension last year.

"I said two years ago when he comes from the suspension he was going to bat .275, get 25 homeruns, and 90 RBIs," Palminteri said. "A-Rod is a great ball player. He would still be in the Hall of Fame without the steroids."

Palminteri, 63, who grew up watching the Yankees picked his club's Mount Rushmore.

"Ruth, DiMaggio, Mantle, Gehrig," he said, but would add Derek Jeter and Whitey Ford to the mix.

It's been nearly 21 years since the release of "Bullets Over Broadway," a movie in which Palminteri gained nomination for best supporting actor.

While he enjoyed playing that role, there's still one part that he regrets not playing.

"I'm still upset about it. I"m don't usually say it but Sonny Black in Donny Brasco," Palminteri said. "I was offered the role but I had to turn it down because I was directing something. But the guy who did it was terrific."

The actor owes much of his success for his autobiographical one-man show "A Bronx Tale," the story of Calogero Anello, a young boy from a working class family who gets involved in the world of organized crime, in 1988. A role he still plays today.

He performs "A Bronx Tale," in Ridgefield, Connecticut on September 18.

For more information or tickets, visit this link.