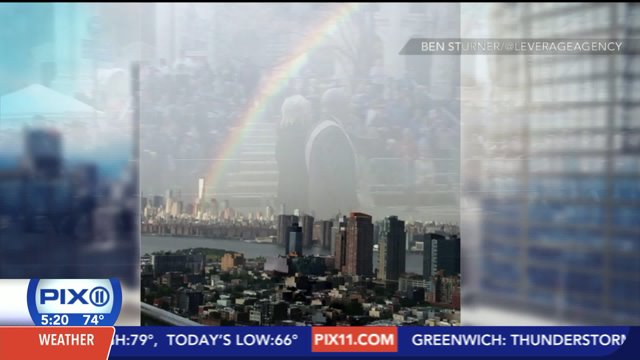 NEW YORK – Amid heavy rain and cloudy skies on the day before the anniversary of the 9/11 terror attacks, commuters were treated to a beautiful sight Thursday morning -- a rainbow appearing to burst from the World Trade Center.

Ben Sturner snapped a photo after spotting it around 8 a.m. and posted it on Twitter, writing, "Amazing NYC Rainbow today. Originating from #worldtradecenter the day before #911."

From different vantage points in the city, others began posting pics of the rainbow, including Love & Basketball star Sanaa Lathan.

It was a stunning vision to break up a dreary Thursday that brought pounding rain and widespread flooding in parts of Long Island and New Jersey.

In New Jersey, Neptune and Ocean Counties were some of the hardest hit as major roadways turned into ponds as the torrential rains overwhelmed drainage systems.