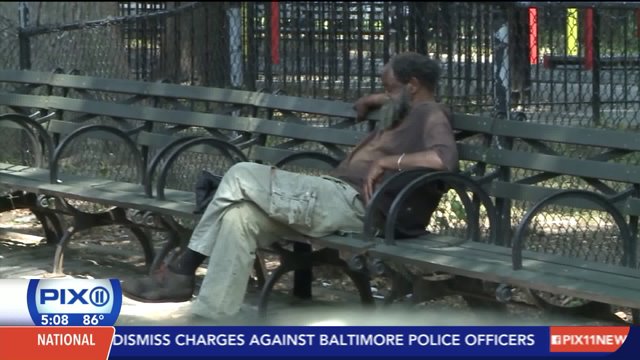 NEW YORK — There is no happy tune to croon when your life is a New York City sidewalk.

Homeless since July 7th, the 35-year-old says she was forced to the streets after she was no longer able to afford her rent in Bushwick. The homeless problem has become an inconvenience for many, yet King doesn't want to make anyone feel inconvenient around her, "I try to go to a different place every night so I am not a burden in any one spot with the police or the businesses."

King's comment comes on a day when Mayor Bill de Blasio as well as NYPD Commissioner Bill Bratton spoke out on the homeless crisis.

Mayor de Blasio primarily answered questions on the the resignation of Deputy Mayor Lilliam Barrios-Paoli, the senior aide responsible to oversee the homeless crisis,  "I’ve said it on the radio yesterday. She and I talked; she made a decision."

When pushed as to whether or not her resignation came as a surprise Mayor de Blasio simply wrapped up his news conference and walked out of the Blue Room at City Hall, "Again, I just said it very clearly. We’ve spoken over months and she made a decision. I respect it. Thank you."

Meanwhile at NYPD headquarters Commissioner Bratton shared that the department has initiated a new outreach program as of August 17th.  The program has officers reaching out to the homeless to help them secure services, but Commissioner Bratton also made it quite clear that there is a legal component to the crisis which protects homeless people.

As for King? She'll continue to find peace through her voice with hopes of a resolution, "I think looking at the problem differently might help resolve it because it's not as though a ton of people are saying  'I want to be homeless in Manhattan, it sounds like fun.  It's not. It's not. Not in 95 degree weather, not in the summer. This isn't a first choice or a second choice or a third choice, this is like I have no other choice."