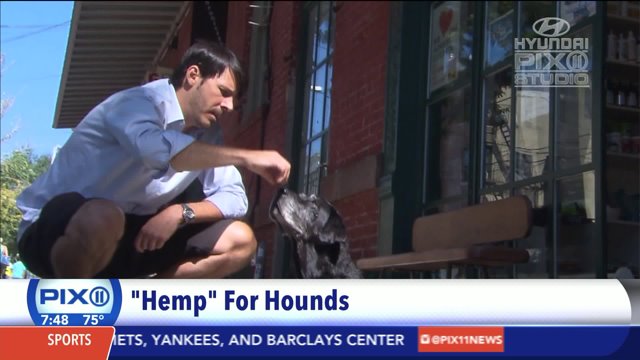 BROOKLYN–– A whole new medical marijuana edible business as an alternate has sprouted, but not for humans.

Six million infused edibles are such demand for people, it created a market for pets. Touted for medicinal powers, pet parents are treating their furry friends with these hemp laced treats.

Chloe  and Cool, they might appear to be happy, older dogs. But you'd never know they're living  and thriving with cancer and arthritis. The owners say their secret is in the snack.

"He loves his Treatibles," Mark Halprin said about his pooch Cool. "He would kinda mellow out, relax and then for next 12 to 14 hours he would have less pain."

"Chloe has heart cancer that metastasized to lungs," Jillian Conigliaro said. "She's still at a dog park, she takes walks, she likes the beach."

Both dogs are using Treatibles, a doggie snack made by the same California company that's been providing pet parents with edible pot treats, but these doggie bites have none of THC found in marijuana that gives a high, instead it's made with hemp."

Owners would say no it's not pot for poochies, it's THC, psychoactive and dogs won't get high.

"Cool, while slower, is again able to walk on his own," Halprin said. "Osteo arthritis is a really vicious disease. We had a cocktail of things that were killing his liver and kidneys, his eyes were changing color, he was losing hair."

Halprin said they ditched the dog medicine, opting for the benefits of CBD or Cannabadoils found in the packet of treats.

"For a lot of people, they think it's a miracle," he said.

Joan Christian owns PS9pets, which is the only store in New York to carry the bite sized CBD treats.

While the company makes no claims, pet owners say it's helping pets with everything from arthritis and cancer side effects, to anxiety and seizures. Chloe stopped eating once she started chemo.

"And my vet said I think I might have something that may help Chloe," Conigliaro said. "We tried treatable for four days and she didn't need her meds anymore. That's my best friend in the whole world. I just wanted him to be happy and comfortable."