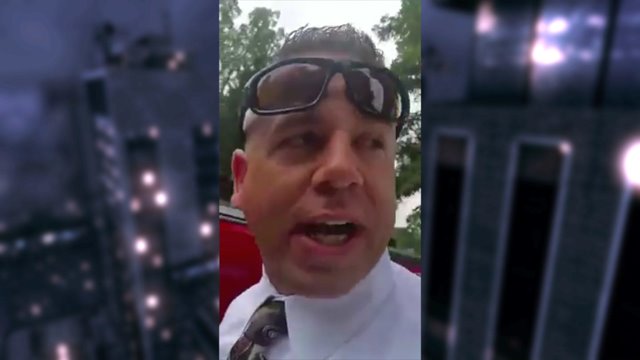 CENTEREACH, N.Y. — Stephen Ruth of Centereach, Long Island apparently got tired of getting tickets after trying to beat red lights at intersections with cameras affixed to them.

So police said Ruth, 42, did something about it -- and then bragged about it on Facebook.

Ruth was in custody at the 6th Precinct in Selden Tuesday night, accused of four counts of criminal tampering, after police discovered his Facebook videos that were going viral on the web.

On the videos, Ruth is seen using a selfie stick to record himself, armed with a painter's pole to push the red light camera's face upwards to the sky.

"All it took was a pair of balls and a painter's pole," Ruth notes, as he tampers with the camera.

Police sources told PIX11 Investigates Ruth tampered with four cameras in Suffolk County, most near the Long  Island Expressway Service Roads at Hawkins Avenue and another near Ocean Avenue.

Ruth -- in a shirt and tie -- tells the camera "I'm going to show you how easy it is to take the power back."

After he defaces the camera, he noted that he saved taxpayers $10,000 for that particular day.

A police source told PIX11 News that Ruth was expected to be bailed out Tuesday night from the 6th Precinct and will appear in court in the morning.