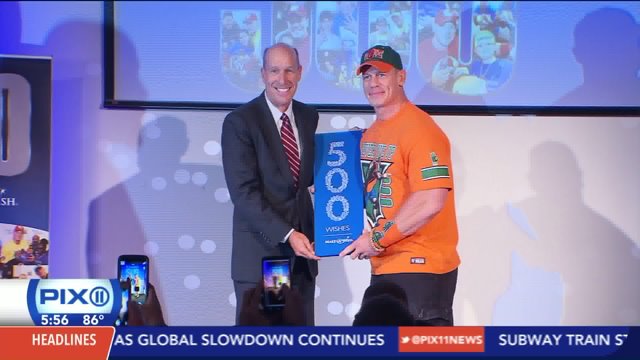 “You never give up, you pick yourself up, you brush yourself off, you push forward, you move on, you adapt – that’s what I believe!” WWE Superstar John Cena once said in a now-legendary speech in the WWE ring in 2009.

It’s a message Cena would through out his career and it’s why so many children gravitate toward the pro-wrestler.

This week Cena celebrated a milestone, granting his 500th wish for the Make-A-Wish foundation. The lucky recipient was 8-year-old Rocco Lanzer from Queens who was diagnosed in January with leukemia.

The diehard fan will be ringside come next week for Monday Night Raw at Barclay’s Center.

Meantime, Cena was honored at an event Friday at Dave & Busters in Times Square, bringing along some WWE heavy weights – professional and pint-sized.

“You got some young folks under some pretty challenging circumstances and they go through some pretty difficult days,” Cena told PIX11 News. “Make-A-Wish provides them with the ability to just be kids and just enjoy.”

Kids just like Tarrique Powell who recently underwent a bone marrow transplant. According to his mother, the WWE Experience has sent him over the moon.

From the Bella twins to WWE Superstar Sheamus, there was no shortage of star power – or smiles.
Looming over it all Friday was hype from this Sunday’s “Summer Slam” at Barclay’s Center.
Cena was quick to respond to the smack his nemesis Seth Rollins served up earlier in the day on the PIX11 Morning News.
“I’m sick of him. It’s my time to shine,” Rollins said.
“He says a lot of stuff. That’s how I feel about that,” Cena responded. “I’ve done a lot of stuff so that’s what’ gonna make Sunday interesting.”