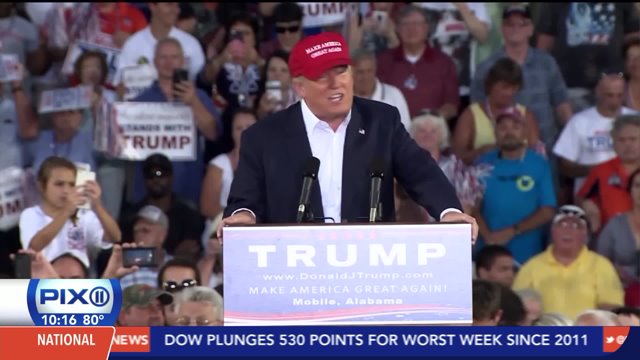 MOBILE, Alabama— Donald Trump addressed thousands of supporters at a pep rally in Mobile, Alabama, on Friday night, the latest show of strength for the Republican 2016 front-runner's campaign.

"We've gotten an amazing reception," Trump said as he began his remarks, turning his back to the podium at the Ladd-Peebles Stadium and pointing to the crowd behind him. "Has this been crazy? Man!"

Clad in a Navy blue jacket and a white shirt, his recognizable "Make America Great Again" red baseball cap adorning his head, Trump quickly launched into the themes that have marked his candidacy thus far, seizing upon an economy he said was stalling and immigration laws that he said need revamping.

The event was previously planned to be held at the nearby Civic Center but was moved to the 43,000-seat Ladd-Peebles Stadium -- a venue normally home to high school football games -- to accommodate the crowd. It was not immediately clear how many people attended the rally; the 5,000-seat bleachers behind Trump were filled to capacity, but the east and west bleachers flanking the field -- which each hold up to 15,000 people -- were about half-full when Trump began speaking around 7:30 p.m. CT.

A message left with Mobile police regarding the crowd size was not immediately returned.

Republican Alabama Sen. Jeff Sessions and Trump's son Eric were notable attendees. The senator briefly addressed the crowd at Trump's invitation, saying the magnate was popular because he stands up for Americans' interests and has promised to defend immigration laws.

"The American people ... want somebody in the presidency to stand up for them," Sessions said, after briefly donning a white baseball cap emblazoned with Trump's "Make America Great Again" slogan.

Trump flew by the stadium in his private jet shortly before 6 p.m., doing a loop around the arena before landing. The fly-by was announced over the stadium's loudspeaker to cheers.

Attendees gathered as early as 6 a.m., and some traveled from as far away as Florida and California to attend.

The first 10 people in line were strangers this morning, but after waiting outside in the 90-degree heat, they befriended one another and all chipped in to buy a canopy from Walmart and a few pizzas from Dominos.

Amanda Mancini, who said she is part of a new movement called "Women for Trump," flew in from Los Angeles. "I wanted to be part of it. I initially thought it was going to be small, and I thought Trump wouldn't be coming to me in California, so I would have to come to him."

Brent Fritz and Jacob Murray, 19-year-old students from the University of Tennessee at Chattanooga, drove in Friday morning to see Trump. They left at 4 a.m. ET and arrived around noon local time.

The first person to get in line was retired Marine Keith Quackenbush.

"This isn't about Republicans, it isn't about Democrats, this is a movement of citizens across America tired of the BS," he said.

Jeb Bush and his allies once again aggressively looked to deliver a different message to Trump's voters, reflecting a new muscular stance against the Republican front-runner first unveiled this week in New Hampshire. Bush's super PAC, Right to Rise, arranged its own flyover at the stadium as a jet carried a banner reading: "Trump 4 higher taxes, Jeb 4 prez."

"Trump's positions are deeply out-of-step with the Alabama way of life," the email reads, according to the campaign. "Trump's history of supporting Democratic ideas will not go unnoticed in Alabama and we trust you will make it known."

Bush and Trump have sparred since the "Apprentice" star launched his campaign in June. Most recently, they have fought over the former Florida governor's use of the term "anchor baby," which many see as derogatory toward Latinos.